Chelsea and Tottenham meet each other for the second leg of the EFL Cup semi-final at Stamford Bridge this Thursday night. Spurs have a 1-0 advantage from their home leg going into this game, with the major positive of not conceding the away goal. Hence, they have more than a chance to score a goal at the Bridge and put pressure on the Blues.

On the other hand, Maurizio Sarri’s men have a stern job to do, but it is not out of sight. They have struggled to score goals in the last couple of months, partly due to the fact that Eden Hazard is starting as a false nine.

Hence, if Chelsea are to reach the final of this competition, they need to be brave in possession and create more chances.

In terms of the injuries, no one could be unluckier than Tottenham right now. They have Harry Kane, Dele Alli and Moussa Sissoko out with injuries, while Heung Min-Son is representing his nation in the Asian Cup. Chelsea though, do not have many problems in medical terms, but the footballl needs to improve.

Here’s the combined line-up featuring players of both teams who are fit at the moment:

Paulo Gazzaniga starts the EFL Cup games, and compared to him, Kepa is a better keeper due to his all-around game.

Not many are better and secure than Azpilicueta at right-back in the league. The Spaniard is certainly better than Kieran Trippier and Serge Aurier.

He has been one of the standout players for Chelsea at the back. The German should feature in this combined XI.

The Belgian is one of the best centre-backs in the league and is better than David Luiz in an overall perspective.

Davies is a much more secure option at left-back, chiefly because Marcos Alonso plays like a winger at times and forgets his defensive duties.

The Frenchman is one of the best midfield players in the world and walks into this team.

The youngster has had a good season so far and stepped up when Spurs had injuries in the midfield.

With Dele Alli out, Eriksen would be the best bet to play in between the lines. The Dane has played as a wide midfielder more often this season, but it is a cliche that he works best as a number 10.

He has been as a false nine in the past few games, however, the Belgian’s best position is on the left wing.

The toughest job is to find a striker in these two teams amidst injuries. Yet, out of the available ones, Giroud is better and more experienced to lead the line.

Read More: Chelsea badly need a striker and this 28-year-old Italian hotshot would be an outstanding buy

With Son out of this game, Pedro is the next bet to start on the right wing in this combined line-up. 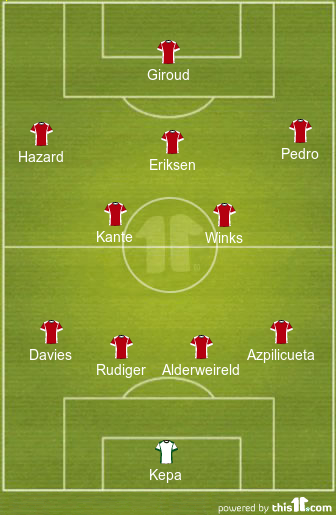