Celtic welcome Hamilton to the Celtic Park on Wednesday looking to make it seven wins in a row in the Scottish Premiership.

The Hoops thrashed Ross County 4-1 on Sunday, with goals from Ryan Christie, Tom Rogic and Mikey Johnston helping them maintain their position at the top of the Premiership table.

Neil Lennon’s team is in sublime form and head into Wednesday’s contest against Hamilton as overwhelming favourites.

Odsonne Edouard missed the Ross County game and is unlikely to be fit for the midweek fixture. Boli Bolingoli is also likely to miss out while Mohamed Elyounoussi won’t start training for another few days. Jonny Hayes remains doubtful as well.

Forster missed out on a clean sheet on Sunday but he’ll be eager to keep one against Hamilton.

Frimpong has nailed down his place at right-back and that won’t change on Wednesday.

Ajer has been a regular fixture since the start of the season and should start alongside Jullien in central defence.

Taylor had a good game against Ross County and is likely to retain his place at left-back, especially with Hayes and Boli Bolingoli unlikely to be fit.

Celtic’s skipper, Brown will look to stamp his authority on the game from the first blow of the whistle.

Forrest started on the left flank on Sunday and caused problems for the Ross County defenders. Lennon will be hoping for something similar from his winger against Hamilton as well.

The goal in the 4-1 win over Ross County should give Rogic a lot of confidence ahead of the busy spell of games. The Australian will look to impress his boss on Wednesday.

Christie took his tally to 15 for the season with a double at Ross County.  A livewire, he is a definite starter against Hamilton.

With Edouard yet to attain full fitness, Morgan is expected to continue leading the attack even though he wasn’t at his best on Sunday. 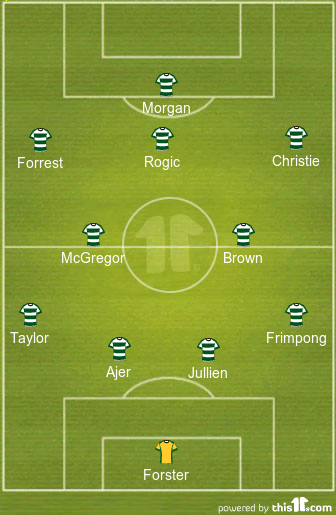