Celtic travel to Tynecastle Stadium to face Hearts on Wednesday, hoping to retain the spot in the Premiership table.

The Hoops registered a comfortable 2-0 victory over Hibernian on Sunday, with Jeremie Frimpong and Odsonne Edouard scoring for the hosts. The result stretched Neil Lennon-managed side’s victory to eight league games in a row.

Hearts, meanwhile, lost 1-0 at home to St. Johnstone in their last game and the result sent them to joint-bottom of the Premiership.

Ryan Christie, Jonny Hayes, Mohamed Elyounoussi and Mikey Johnston missed Sunday’s game against Hibernian, but Lennon would hope to have Christie back for the midweek fixture. Hayes will be assessed but Elyounoussi won’t be available due to stress reaction in the foot.

Forster kept a clean sheet on Sunday and will be raring to shut the shop as quickly as possible against Hearts.

Frimpong scored his first goal in Celtic colours over the weekend, impressing in an advanced role. However, he’ll find himself at right-back on Wednesday.

Jullien has been a fixture since the start of the season and is expected to retain his place in the team.

Ajer is in good form and would have to be at his best to keep Hearts at bay.

Bolingoli-Mbombo completed the entire 90 minutes against Hibernian and is likely to keep his place at left-back.

An influential figure on the pitch, Brown will look to take control of the game from minute one.

Partnering Brown in central midfield will be McGregor, who has been one of the best players for Celtic so far this season.

Forrest is unplayable on his day and the Hearts defenders will hope he doesn’t turn up on Wednesday at Tynecastle.

Christie has become an integral performer for the Hoops in recent times, scoring 16 goals in 28 appearances so far this season. He could be back against Hearts.

Ntcham has been in and out of the team but he is likely to start in an advanced role on Wednesday.

Edouard is in hot form this season and should lead Celtic’s attack as usual. 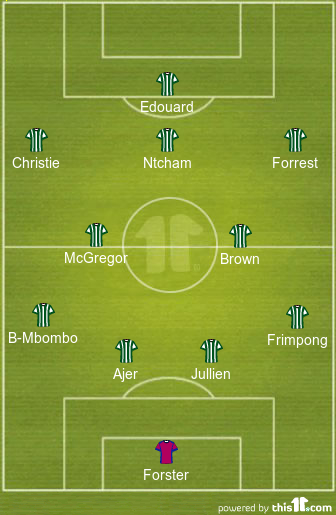