Predicted Chelsea line-up to face Tottenham in the EFL Cup

Chelsea will look to exercise their quest for the first silverware under Maurizio Sarri when they face Tottenham in the first leg of the EFL Cup semi-finals. The Blues won their FA Cup tie against Nottingham Forest on Saturday with a changed line-up. The manager would be looking to bring his preferred eleven back on the pitch in this big game.

They are up against a Spurs side who have been in good form lately, hence, the tie won’t be easy for the Blues. Chelsea play away home and scoring a goal or two here will help them in the second leg.

Ruben Loftus-Cheek is again caught with a lower back injury, while Willian and Pedro are expected to be out for this game. Mateo Kovacic is suffering from illness and would go under a late fitness test. Olivier Giroud is better than Morata but is not fit for this game.

The Spaniard was rested for the FA Cup tie but is expected to be back in goal for this game.

The captain did play the last few minutes against Nottingham. He was predominantly saved for this tie.

The German was rested on Saturday and should be back on Tuesday night.

He has had a terrific season so far and his partnership with Rudiger has been fantastic. The duo will be hoping to keep a clean sheet in this home leg.

He wasn’t even considered for the squad in the FA Cup game. Thus, the Spaniard should be fresh to start on Tuesday.

He was an unused sub against Forest and expect him to return straight back to the line-up.

Played the last five minutes on Saturday and was chiefly saved to start this big game.

The Englishman started the game against Forest, however, with illness issues to Kovacic, Barkley may start this game as well.

With Willian, Pedro and Loftus-Cheek out for this game, expect the young winger to start.

He would have regained some confidence after scoring a brace on Saturday. Chelsea fans would be hoping for him to be at his best come Tuesday.

The Belgian had to play over 50 minutes on Saturday after Loftus-Cheek got injured. He is Chelsea’s star man and should start this game. 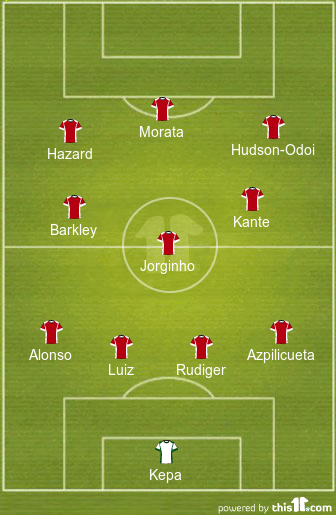