Arsenal took the upper hand in the first leg of the semifinals of the Europa League as they comfortably brushed aside Spanish side Valencia 3-1. A brace from Alexandre Lacazette and a late yet hugely important goal from Pierre-Emerick AUbameyan gave the Gunners a massive advantage ahead of the second leg.

The Gunners started off the game with a lot of possession but it was the visitors who had the first big chance of the game. Dani Parejo’s freekick found Gaya, who crossed it back into the danger area. But Garay’s shot from a couple of yards out went over the bar.

A horrible miss by the Argentine but a huge let-off for Arsenal. However, the visitors took the lead a few moments later after another set-piece by Parejo to the far post was headed across goal for Diakhaby to nod it home.

Valencia controlled the possession for the next few moments and looked threatening with Parejo being the centre of the action. Guedes and Rodrigo’s movement upfront was hurting the Gunners but they managed to hold on.

The Gunners got back into the game after Aubameyang was set free on the left side of the field and after a nice bit of dribbling, he found Lacazette who passed the ball into the back of the net.

The goal swayed the momentum back in Arsenal’s favours as they began to dominate the possession. Granit Xhaka picked up the ball on the left-hand side and crossed it to Alex Lacazette, who lost his marker brilliantly and headed home to give the hosts a deserved lead.

Xhaka was again involved from the same position and his cross this time found Aubameyang, whose volley bounced over. It was huge chance for the Gunners to kill off the game.

The Gunners dominated the game for the rest of the half and went in at the break with a deserved lead, thanks to Alex Lacazette’s fantastic first-half brace.

Arsenal continued to dominate the possession at the start of the second half but the visitors had numbers behind the ball, which made it difficult for the Gunners to penetrate.

A long ball over the top saw Guedes one on one with Sokratis but the Greek warrior did well to recover the ball. Unai Emery made his first change by bringing on Lucas Torreira in place of Matteo Guendouzi, who was having an outstanding game.

Koscielny failed to control a long ball off Garay, which fell into the path of Guedes but Sokratis was there again to bring back possession.

The first big chance of the half fell to the hosts after Aubameyang’s pace left Gabriel chasing shadows and his cross found Lacazette but the Frenchman mistimed his header.

It was a huge chance for the former Lyon man to get his first hattrick for the Gunners. Lacazette had another glories chance moments later as found himself at the end of Kolasinac’s shot but his shot was saved brilliantly first by Neto and then Gabriel, who denied the Frenchman on the rebound.

The visitors were lucky to be in the game at this point. Mesut Ozil was replaced by Henrikh Mkhitaryan in the 78th minute and the German was given a standing ovation for the shift he put in.

Kevin Gameiro had a chance after he found himself at the end of Wass’ ball but his volley after a tremendous bit of skill went high over the bar. Nacho Monreal replaced Laurent Koscielny, who looked to be limping a bit.

Arsenal finally extended their lead after Pierre-Emerick Aubameyang volleyed in Kolasinac’s cross from a tight angle to give the Gunners a huge advantage as they head to the second leg next week.

Valencia failed to trouble Petr Cech in the remaining few minutes and Unai Emery’s side were the deserved winners after an outstanding performance on the night. 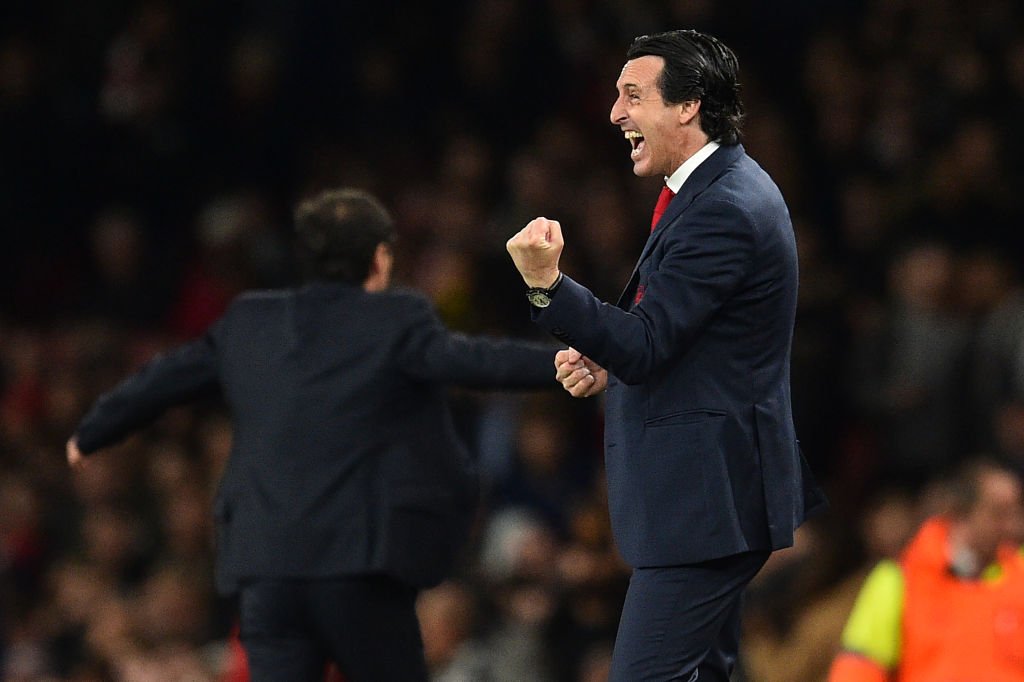 Here’s how Arsenal fans reacted to the huge victory: