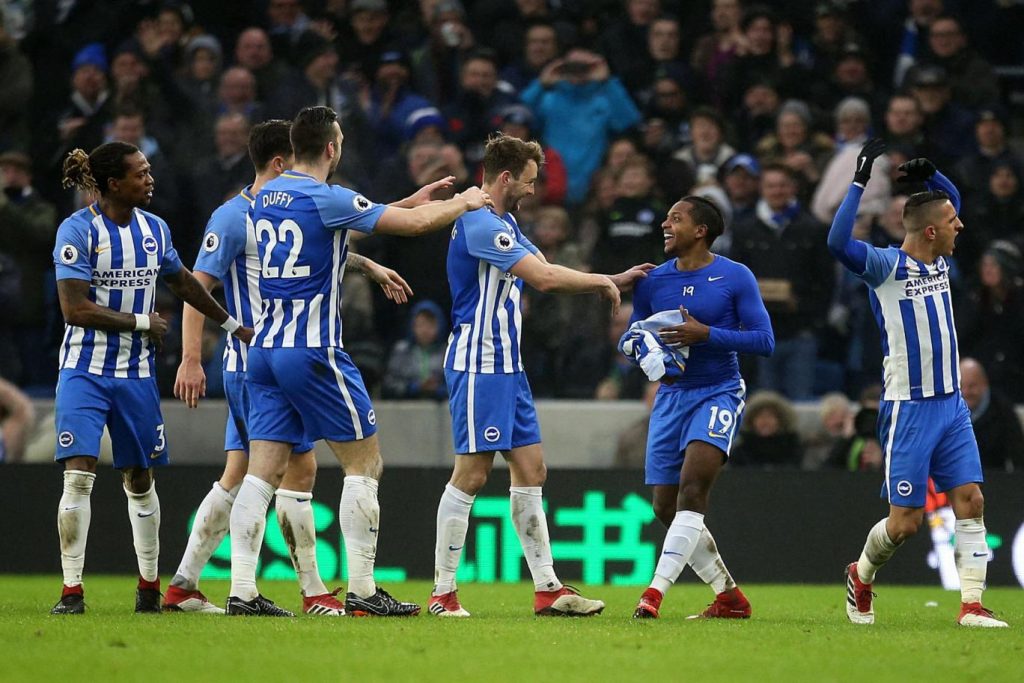 Brighton & Hove Albion are in a relatively better state compared to other relegations strugglers and their recent form has strengthened their survival hope ahead of weekend’s tricky clash against Arsenal at Falmer Stadium. Chris Hughton would be keen on continuing their impressive run and should be confident of a favourable outcome versus the Gunners, who surrendered miserably against Manchester City in the Carabao Cup final.

Brighton do not have any major injury concerns except a few names who are already sidelined for a lengthy spell. Jiri Skalak is ruled out with an ankle injury, Steven Sidwell picked up a training injury and fractured his ankle whereas Isaiah Brown is out for the rest of the season following his ACL injury.

The Seagulls have mostly found themselves lined up in a 4-4-1-1 set-up under Hughton and the gaffer should retain the same against the Gunners on Sunday afternoon.

Although the Seagulls have acquired veteran Tim Krul, it is Australian Mathew Ryan who has been preferred between the sticks throughout the campaign. The former Valencia custodian is enjoying a pretty decent debut campaign and is set to start the game against the Gunners.

Schelotto, mostly a winger or a wingback, has adapted well to the right-back role and is now being preferred over skipper Bruno who has struggled to adjust to Premier League’s pace at the age of 37.

Duffy has performed consistently in the heart of the Brighton backline and will continue to feature alongside Lewis Dunk in a central defensive role.

The defensive duo of Duffy and Dunk has formed a stable and resilient partnership at the back and Hughton won’t be in a quandary while choosing his back-four.

The Cameroonian has signed a new contract until the summer of 2019 following his impressive display and is likely to start on Sunday.

Knockaert was honoured as the Championship Player of the Year for a scintillating season last campaign, as he guided the Seagulls to earn a Premier League promotion. He, however, struggled initially to settle down in the top-tier but is now back to his best and has reclaimed his place in a wide midfield role.

Like Duffy and Dunk at the back, Brighton have a very stable and regular central midfield duo in the form of Stephens and Propper. Stephens played a huge role last season to get his side promoted to the Premier League and is continuing the good work in the middle of the park this season as well.

Propper has been one of many shrewd pieces of business Hughton made in the summer and the Netherlands international has featured in all Premier League games this season in central midfield. The former PSV star is tipped to be a massive influence versus the Gunners.

The Colombian completed a club-record transfer back in the summer and was primarily introduced as an impact substitution. Later, he established himself as a strong first-team resource and is now featuring regularly down the left flank.
Pascal Groß (CF)
The little known FC Ingolstadt 04 midfielder was Brighton’s first Premier League signing. The former German youth international has proved to be one of the best transfers of the Premier League season and is already under the radar of many high-profile outfits. He will start the game in a No.10 role and create chances for Glenn Murray to capitalise on.

The 34-year-old Englishman is Brighton’s highest scorer so far with 10 Premier League goals for the season already. He also scored a brace last week against Swansea City. The in-form striker is set to start against the Gunners and will be keen on continuing his stupendous form for the remainder of the campaign.