Derby 2-2 Southampton: The Rams fight back from 2-0 down to earn replay

Derby County staged a quickfire comeback against Southampton with two excellent goals from Jack Marriott and Tom Lawrence to force a FA Cup third round replay.

Nathan Redmond’s double, with goals at the start of each half, looked like they may be enough to see off the Rams but strikes from Jack Marriott and Tom Lawrence means the sides will meet at St Mary’s.

Southampton looked to establish control by pressing high up the pitch in the opening exchanges and they got their reward inside the first four minutes. Shane Long hooked on to Redmond and the winger’s low strike from the left of the box was deflected off Richard Keogh and into the bottom corner.

Derby County looked to respond and Duane Holmes beat Matt Targett with a moment of magic before winning a corner, but it resulted into nothing. Another attack produced nothing with Bryson slicing a shot well wide from 25 yards.

Southampton, at the other end, went mightily close to a doubling their lead when James Ward-Prowse’s low cross somehow evaded Jack Stephens at the back post and went out.

Duane Holmes was the most impressive player for Derby County in the first half and he linked up well with Marriott twice but was denied the equaliser. 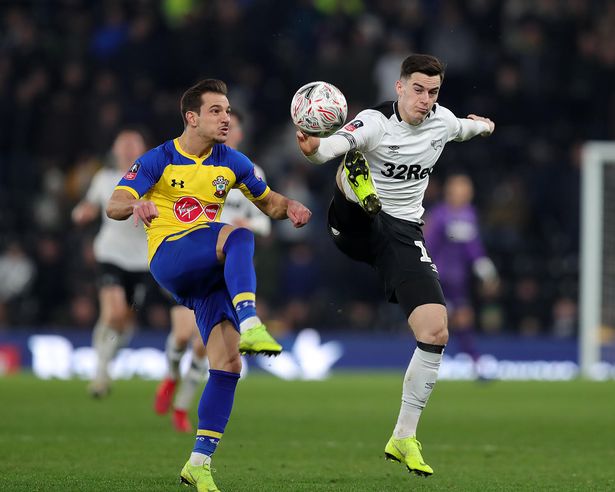 Southampton started the second half as they started the first as Redmond doubled his and Saints’ tally for the afternoon on the 48th minute. He picked up possession on the left and cut inside before powering a smashing right-foot shot from 20 yards, which flew into the net, leaving Kelle Roos rooted to the spot.

Lampard introduced David Nugent in place of Max Bird in search of a goal back and the move worked wonders. The Rams pulled one back 10 minutes later; Tom Lawrence’s flick around the corner set up Marriott, who slammed a low volley past Gunn from 12 yards.

Three minutes later and Lawrence levelled when he found space on the left and moved on to his right foot before letting fly a stunning 20-yard drive which beat the hapless Gunn.

Derby, though, had a fantastic opportunity to claim victory with virtually the last kick of the game in the 95th minute when Nugent squared the ball to Marriott, who blazed his shot in the crowd due to pressure from Jannik Vestergaard.

Read more: 12 goals, 5 assists in Championship last season – This Brazilian star would fire Derby County into the PL for sure and Lampard should sign him

Delighted with the way Derby County came from two goals down to set up a replay against Southampton, here’s how the fans reacted.

@DuaneHolmes has looked good again. Could be a big player for us 🐑 #DCFC

How slick is Duane Holmes? #DCFC

Quite impressed by Duane Holmes so far but this is a bit of a struggle.. #dcfcfans

Duane Holmes is unplayable today! Got to start against Leeds #dcfc

Duane Holmes. Great find and great value for money.
Proving size isn’t everything. Very strong first half from him! 🐏👍

Duane Holmes is next level out wide 👀🐏

How good was @DuaneHolmes btw?

Great to see a player have the confidence to run at players and or draw a pass forward.

Let’s see a run in the league for him, MOTM and we’ll deserved.