Norwich City opinion: How the Canaries could line up with Drmic and Roberts

According to the BBC, newly-promoted Norwich City have signed Josip Drmic on a free transfer from Borussia Monchengladbach. He has penned a three-year deal at Carrow Road, after four seasons with Monchengladbach.

The Switzerland striker joined Monchengladbach from Borussia Dortmund four seasons ago but struggled for game time last season with a back injury and a muscle tear. He only managed two goals in five Bundesliga appearances before leaving Borussia Park upon the expiry of his contract.

Drmic, 26, is Norwich’s second new arrival ahead of the 2019-20 season after Manchester City winger Patrick Roberts joined on a season-long loan.

He may have struggled with injuries for the last couple of seasons in the Bundesliga, but the 26-year-old has a good record for the Switzerland national team and has volumes of experience at the highest level.

Norwich boss Daniel Farke wanted to sign a new striker to compete with Teemu Pukki in the Premier League. Pukki was a revelation in the Championship after arriving at the Carrow Road on a free transfer last summer.

He notched an incredible 30 goals to help fire the Canaries to the Championship title. Even if the Finn banged goals left, right and centre in the Championship, whether he’ll be able to produce the goods consistently in the Premier League remains to be seen.

So, signing Drmic to compete and push Pukki is a step in the right direction. The Canaries already had an exciting attacking unit which consisted of Pukki, Onel Hernandez, Marco Stiepermann and Emi Buendia.

The attacking unit was chiefly responsible for the Canaries scoring 93 goals in the Championship last season. The addition of Drmic and Roberts has undoubtedly bolstered Farke’s team, whilst adding depth to the squad.

But Farke will have to take some big calls while setting up his team in the 2019/20 season opener against Champions League winners, Liverpool.

Marco Stiepermann impressed last season in a No.10 role after previously playing at left-back during the 2017-18 season, following his summer move from Bochum.

The Canaries did hand him a new three-year deal and despite his good performances in the Championship, Stiepermann could be apparently deemed as a squad player by Farke.

Both Drmic and Roberts are versatile forwards and it’ll be interesting to see how Farke utilises them next season. That being said, here‘s how Norwich City could line up in their first game against Liverpool with the two summer signings so far? 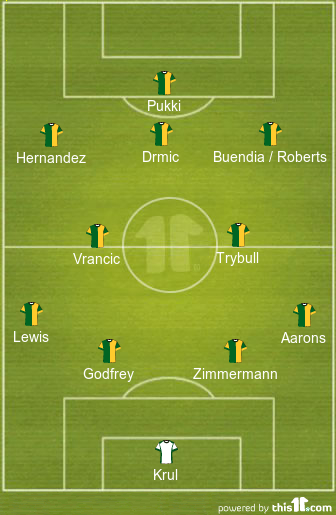