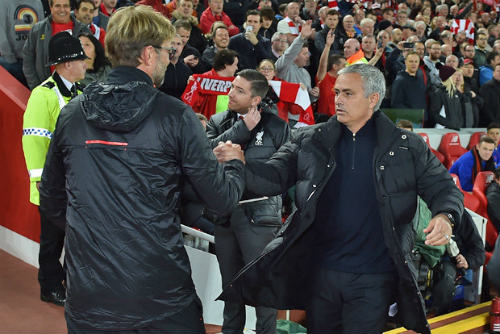 On paper, this is a match between two of the world’s finest tactical minds with a complete contrast of styles. With Klopp you have the high energy, progressive and exciting geggenpress. Whereas Mourinho’s pragmatic controlling strategy that we have watched over the years can be dull, but highly effective.

But football isn’t played on paper, and in a fixture like this with the emotion involved, tactics can go out of the window.

Liverpool went into the game as favourites after an impressive start to the season, whilst United have disappointed so far. But Mourinho is the king of spoiling a party and would have relished going to Anfield and frustrating their fans.

And unfortunately for the neutrals, this is exactly what happened. It was clear from the start what Mourinho’s game plan was as he brought Fellaini back into the team, and included Ashley Young out wide – a player he clearly trusted to do the dirty work defensively.

Liverpool meanwhile, went with Daniel Sturridge up front, a player that has struggled for life as a Klopp player. Whilst a great finisher, he has looked reluctant to join his teammates in pressing the ball.

The game started frantically with United setting their stall out early, delivering a couple of crunching tackles and using their strength in midfield effectively, winning every second ball and asserting their physical dominance at every opportunity. Every time Firmino, Coutinho or Mane received the ball, they were not allowed to turn and start the intricate play that has impressed so many this season. This meant that Sturridge, whose selection raised question marks, was especially isolated. As you can see on the Liverpool heat map (Left below), they had plenty of possession in deeper areas, but attacks come to a halt when they tried to get their creative players on the ball.

Whenever Manchester United (Above right) were in possession, they looked to be more direct, a tactic employed to bypass the Liverpool press. The center halves and fullbacks spent a minimal amount of time on the ball. When Mourinho was questioned about his team only having 35% of possession, he stated that it was by design, a tactic employed to stop the Liverpool press that creates many of their chances. United also looked to slow the game down at every opportunity. Free Kicks, goal kicks, throw-ins were taken at a pace so leisurely you’d think you were watching a Sunday league vets team.

And frankly, this was the pattern for the whole first half as United looked to kill the game, and Liverpool looked like a team that were failing to live up to the pressure that recent praise has clearly heaped onto them. At times, Man United’s formation was a 6-3-1 as both Ashley Young and Rashford played as fullbacks as they tried to kill any threat of Liverpool out wide. Liverpool simply had no answers. Unfortunately, the second half only changed very subtly. It was much the same as the first half, except Manchester United were a bit slower and less aggressive in stopping Liverpool’s attacking players from receiving the ball ‘in the hole’. This improved further when Adam Lallana was introduced in the 60th minute for the lonely figure of Daniel Sturridge. This gave Liverpool more fluidity and led to them picking the ball up in little pockets in front of the United defence. And so they created a few openings that required De Gea to come to the rescue or a last-ditch tackle by a United defender.

Manchester United completely failed to build on their solid defensive display, if in fact they even wanted to. It was simply a classic Mourinho game-plan – frustrate, nullify, and try to produce a goal from a set piece or bit of magic.