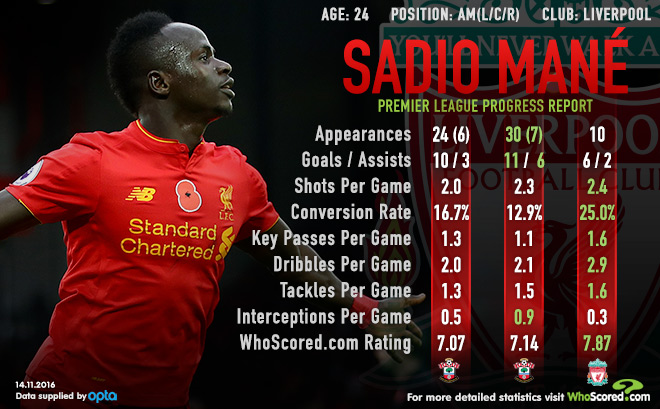 Liverpool and Jurgen Klopp celebrated two weeks of staying top of the Premier League table and goes into the next round with a trip to the St Mary’s this weekend. Though they are genuine title contenders after the tremendous start to their season, there are a few things that might derail their title journey and Sadio Mane’s AFCON duties might be at the top of that list. The doubts over their defense are not yet washed away but Joel Matip and Dejan Lovren have formed a solid partnership at the back helping Liverpool stitch a 12-game unbeaten run early this season. Though their mistakes might cost them a few points, Mane’s absence might just send the club into a slump.

The Senegalese winger will be busy with his national team in January, helping the Africa Cup of Nations leaving Liverpool a bit short in attack. Danny Ings’ injury only compounds this problem as Klopp’s attacking options reduce drastically during that period. Liverpool have been one of the most entertaining sides in Europe this season scoring 30 top flight goals and every Liverpool player has had an equal say in their tremendous start. Henderson and Can have marshaled the midfield keeping the game rolling while Adam Lallana and Georginio Wijnaldum have added a bit of a mettle to the midfield along with some creativity. Roberto Firmino and Philippe Coutinho are both playing at a different level while Sadio Mane has improved overall as a player.

Having moved to Liverpool in the summer, to ease their problems on the wing, Mane has made an instant impact on the side scoring 6 goals,  more than half of his tally from the previous season and has been an integral player in the side. Liverpool’s only loss this season has come against Burnley in a game that Mane was absent, showing the amount of an impact he has had on this Liverpool squad. With genuine pace and a never say die attitude, Mane is an intelligent player who has provided the width in attack for Liverpool that was missing from the previous season. His shots (2.4), key passes (1.6), dribbles (2.9), and tackles (1.6) per game, are considerably higher than his figures from the previous season and are also among the best in the squad at Anfield.

Klopp does not have a fixed position for his front three with Coutinho, Firmino and Mane all interchanging places in the final third at times. But Mane has been given a freedom in the attack and that has helped him prosper as a player and his exploits have helped add to the high pace and intensity game of the manager at Anfield and it will be something that will be missed when he is out on international duty. Sheyi Ojo is the only other natural winger in the side. Wijnaldum and Lallana are both good enough to play in that position while the manager might also think about using Coutinho and Firmino behind Sturridge or Origi. Mane’s absence will see Klopp change a system that is working and there is every chance that the effect might be long lasting and that they might lose important ground in the title race. Mane is thriving in Klopp’s system and his absence will cost Liverpool a title is yet to be seen.

Do you think Mane’s absence will affect Liverpool in January?