Arsenal failed to leapfrog their North London rivals after a shock 3-2 loss to Crystal Palace at home. Goals from Christian Benteke, Wilfried Zaha and James McArthur was enough to give the visitors the three points.

The hosts had the first chance of the game after the ball ricocheted into the path of Mesut Ozil at the edge of the box but his shot was comfortably saved by Guaita.

Palace’s first chance came from a corner a few minutes later where Dann had a free header but Arsenal held on. Mohamed Elneny had a golden opportunity to give Arsenal the deal but his volley flew over the bar. 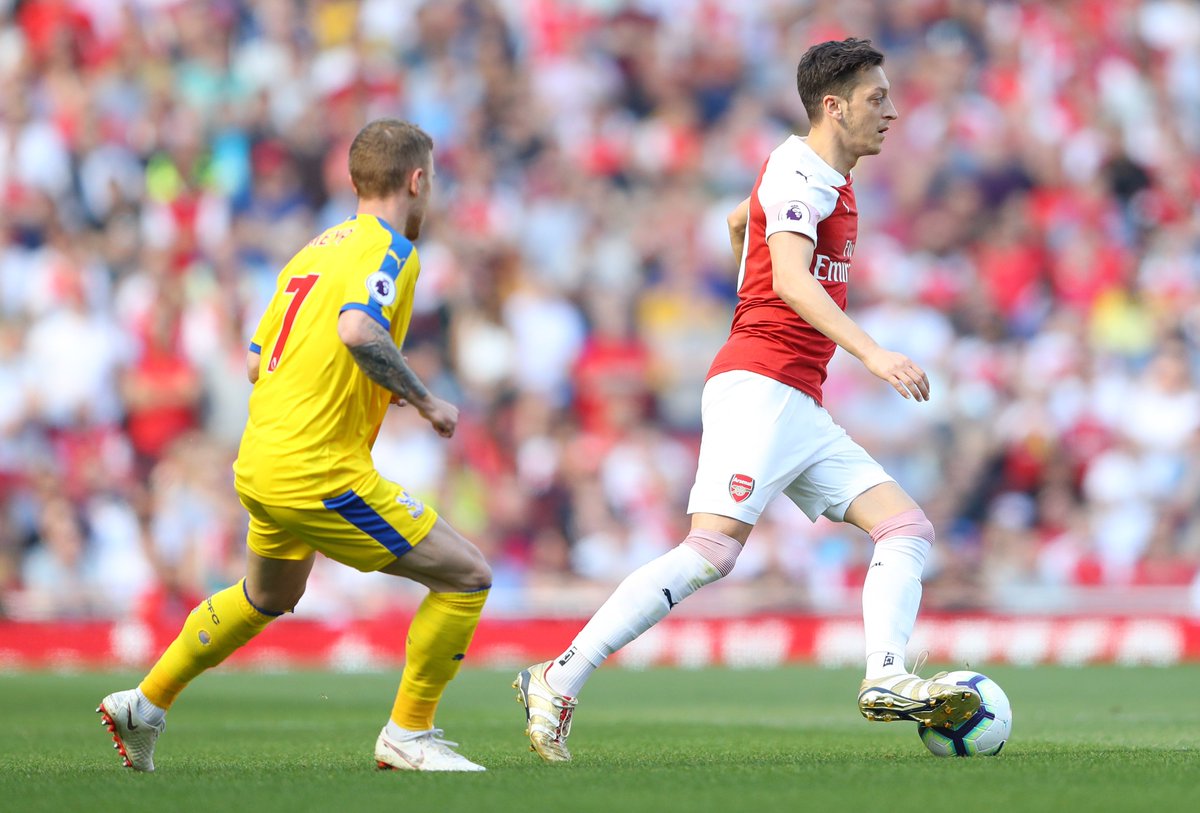 Dann was found free in the box yet again and his header this time fell into the path of Kelly but his shot under pressure from Mavropanos was off target. Good defending from the Greek there but Palace should’ve been ahead.

However, Palace did go ahead in the 17th minute after Benteke was left free in the box from a freekick and his header found the net despite a hand from Bernd Leno. Some poor defending from Mustafi gave the Belgian so much space.

The hosts started to get in on the game as Alexandre Lacazette’s shot on the turn was well blocked by Kelly. 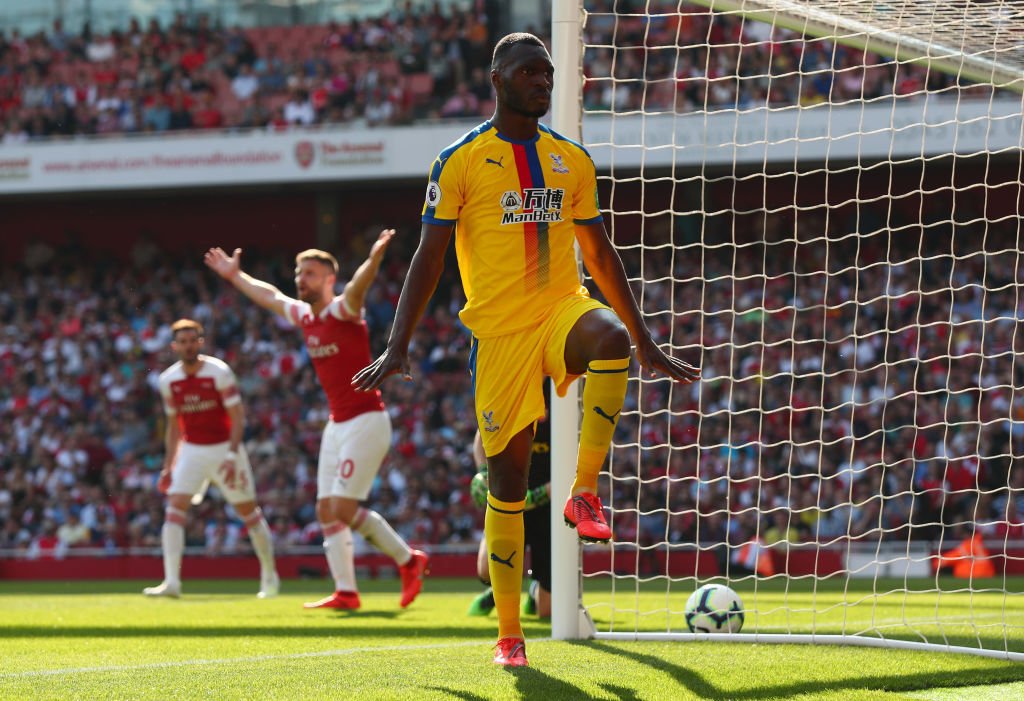 Roy Hodgson’s side showed outstanding organisation with almost everybody back when not in possession. Mustafi had a huge chance to make up for his mistake at the back but his header from Ozil’s corner went over.

Mavropanos drove past three players but his shot from outside the box went wide. Arsenal had a massive shout for a penalty after Kolasinac’s cross struck Wan-Bissaka’s arm but the referee failed to spot it.

Palace had a huge chance to double their lead moments before halftime but Leno brilliantly saved twice from Kouyate. A big let-off for the Gunners as they headed into the break 1-0 down. 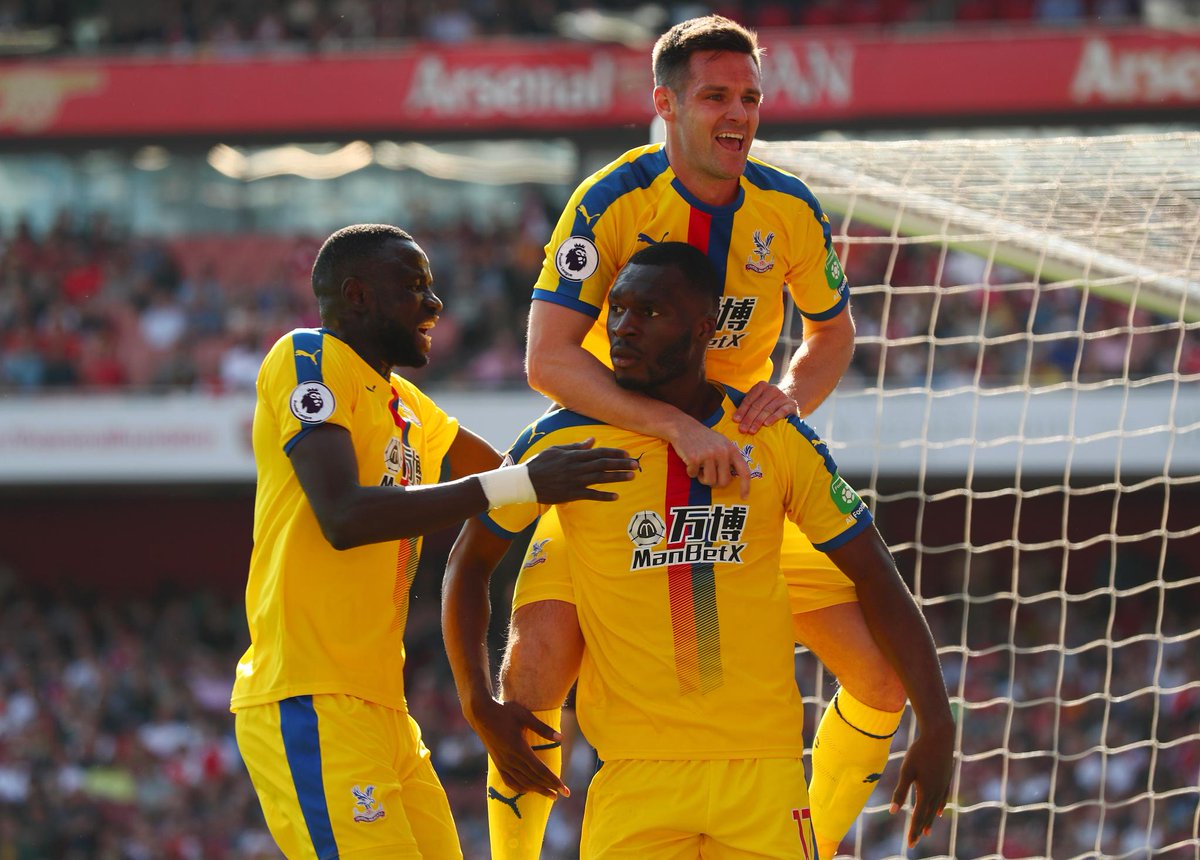 Unai Emery brought on Alex Iwobi and Ainsley Maitland-Niles in place of Carl Jenkinson and Mavropanos and the change worked immediately. Iwobi flicked the ball into Lacazette whose reverse pass found Ozil and the German finished with his trademark chip.

Arsenal began to increase the tempo of the game with Ozil the key player on the pitch. Palace struggled to get on the ball but had bodies behind to contain the Gunners.

However, at the hour mark, Shkodran Mustafi blindly let the ball roll into the box in the hope of Leno picking it up but Wilfried Zaha buried it in to restore Palace’s lead. 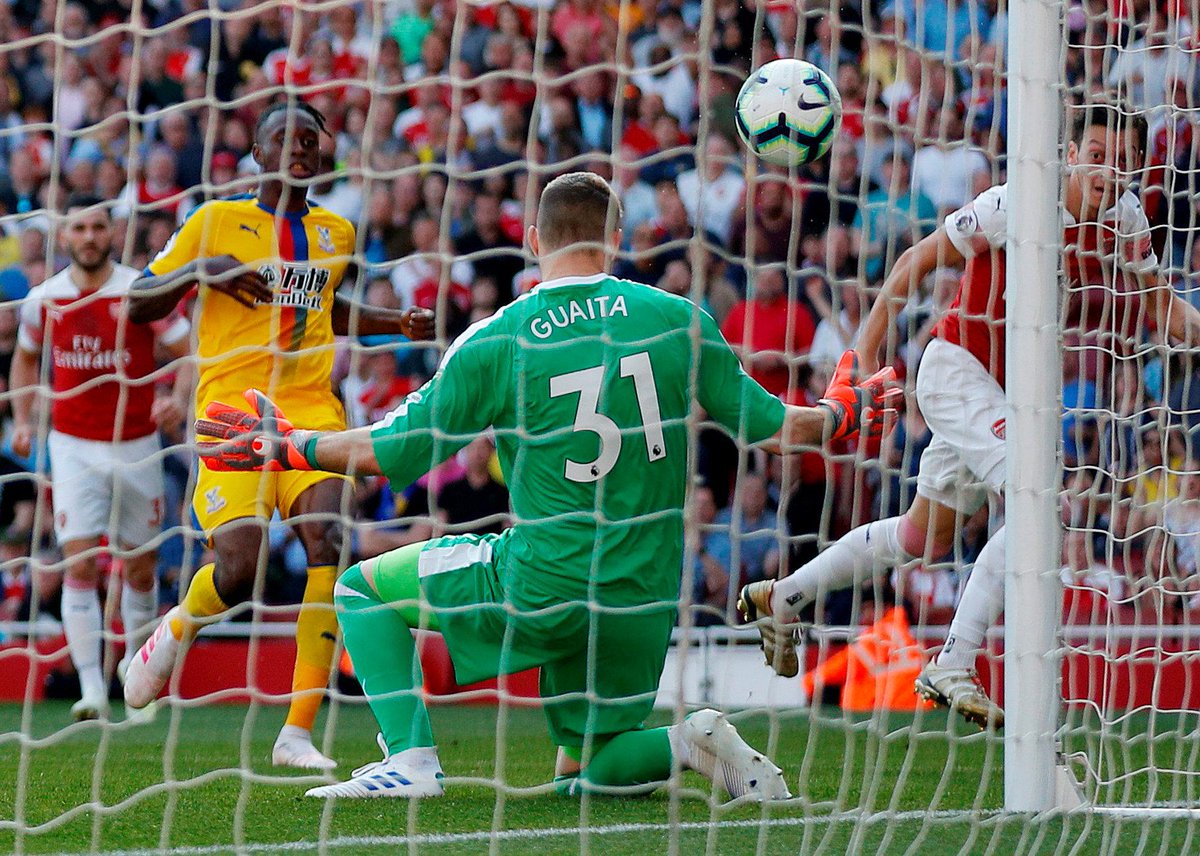 The goal was completely against the run of play but the Gunners’ defensive woes continued as Palace extended their lead a few minutes later. Skipper Milivojevic’s corner was flicked on into the path of McArthur, who nodded the ball home.

Shocking defending from Arsenal yet again as the Eagles now had a two-goal cushion. Arsenal brought on Lucas Torreira in place of Elneny as Unai Emery looked for a comeback.

Pierre-Emerick Aubameyang drove into the Palace box brilliantly and threaded a ball into to Lacazette but the pass bounced off a Palace defender back into his path and he smashed it home with 13 minutes to spare. 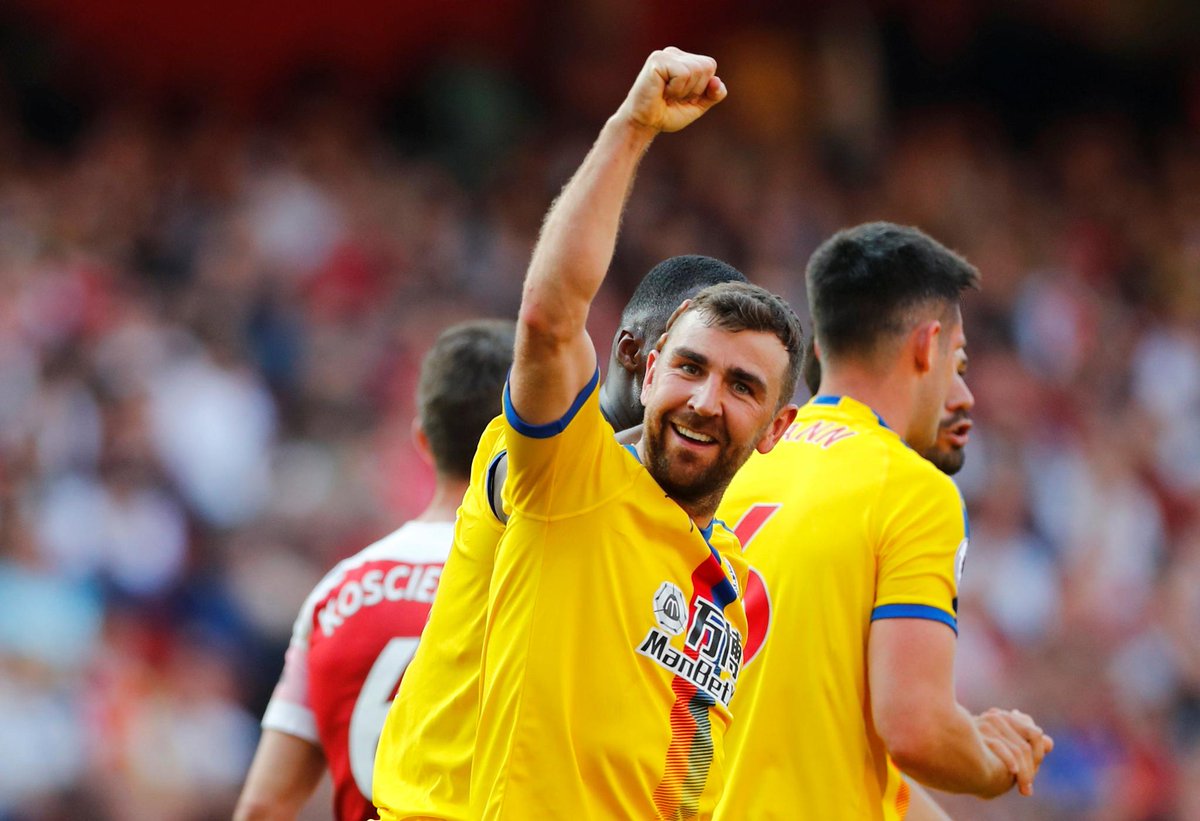 Alex Lacazette dribbled past Dann into the box and the Frenchman looked to be clipped from behind but John Moss waved play on, leaving the Gunners frustrated.

Mustafi’s poor night continued as he went into the book for simulation in the 85th minute. Ozil’s delightful cross from the right flank almost crept in at the far post but Guaita did well to push it away.

The Gunners piled the pressure on the visitors as Matteo Guendouzi and Lacazette linked up brilliantly and the latter found Iwobi in the box but the Nigerian’s weak shot was saved comfortably. 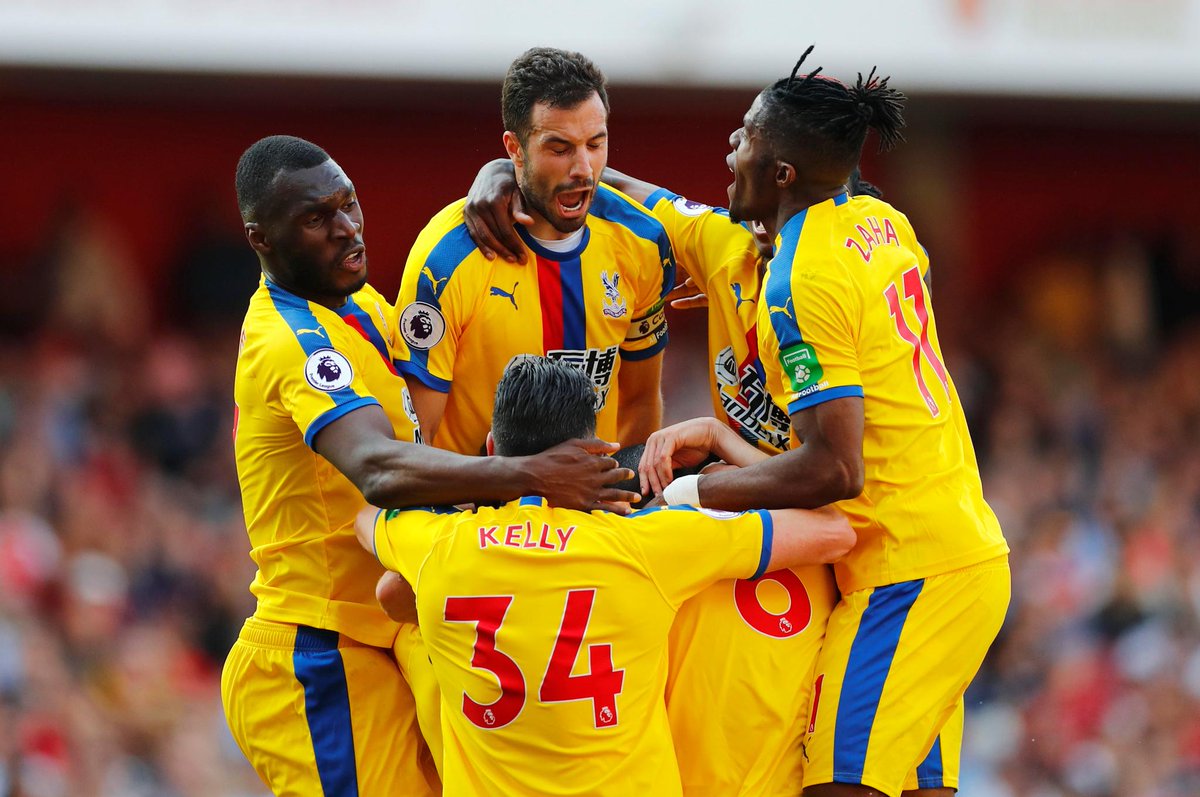 Palace held on to pick up the three points as Arsenal’s defensive woes continue to hurt their chances of finishing in the top 4.

Here’s how some Arsenal fans reacted after the disappointing result: