This week’s set of Premier League fixtures had its fair share of surprise results with certain games standing out above the others. It certainly was an eventful one packed with thrills and spills.

The biggest game of the weekend was undoubtedly the showdown for 4th place at the Emirates between Unai Emery’s Arsenal and Manchester United, who were unbeaten in the league since Ole Gunnar Solskjaer took charge in December. Eventually, Arsenal overcame the challenge and won the match 2-0.

Chelsea played out a touch 1-1 draw against Wolves while league leaders Manchester City triumphed over Watford by a 3-1 scoreline. Elsewhere, Liverpool came back from an early Burnley goal to win 4-2 and keep the pressure on City.

The two real surprises of the weekend came in the form of wins for Cardiff City and Southampton against West Ham and Tottenham respectively. And Brighton were massive winners too as they picked up a very impressive 2-1 away win at Palace.

Team of the Week

The German international looked like a brick wall at the back and he caused the free-flowing United side to draw blanks.

The youngster scored Southampton’s opener against Tottenham and he even managed to nullify Spurs down his flank.

The Greek centre-half made multiple game-changing tackles throughout the game and is slowly becoming a leader.

The Gabon international had a spectacular game against West Ham as he commandeered his defence to perfection.

The young Man City prodigy was defensively composed in the first period and then became an attacking threat in the second.

Despite Granit Xhaka getting the goal, the Welshman makes the cut here because he was simply sublime on the ball against United.

The Southampton midfielder scored yet another beauty to ensure the win against Spurs while his positional versatility is an asset too.

The Spaniard was on fire against Everton as he came out in the second half like a man on a mission to score two and assist one.

The Liverpool star came alive after going down against Burnley and with some help from Roberto Firmino, restored their lead.

The Englishman was unstoppable in the second half against Watford as he scored a hat-trick in about 15 minutes to give City the win.

The Englishman ripped Scott Parker’s Fulham side to shreds as Brendan Rodgers’ revolution at Leicester got a win. 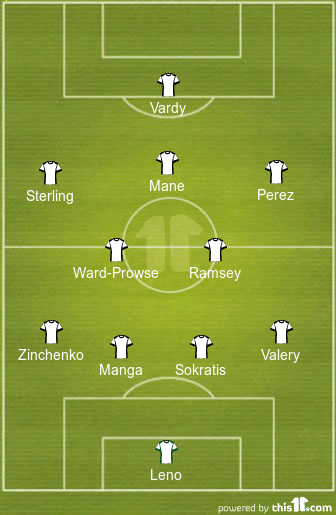