The 2013/14 Serie A season began on Saturday and closed out Round One on Monday, and much like last year, it created several storylines.

Juventus commenced the defence of their two Scudetti over the last two campaigns, Napoli were hoping to challenge for the title even more this year, and the likes of Catania, Lazio, and Udinese were trying to build on their recent successes. 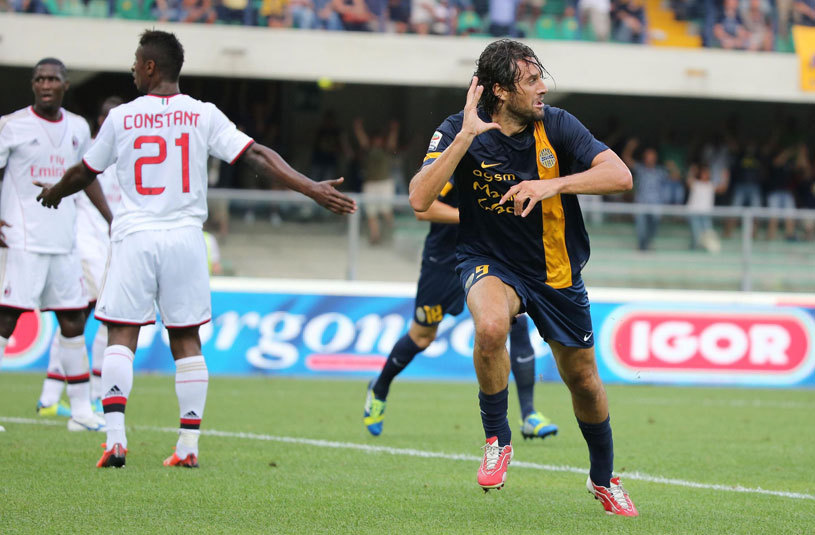 One of the major talking points heading out of the weekend was the performance of newly promoted Hellas Verona, who faced AC Milan in their first Serie A match since 2002. In fact, Verona were on the brink of relegation to Serie C2, the fourth tier of Italian football. However, they managed to win the playoff against Pro Patria 2-1 on aggregate to keep them in C1. Hellas averaged 15,000 fans per home game that season.

The support has always been unquestioned by neutrals across the peninsula. When Verona eventually returned to Serie B in 2011/12, they had the second highest number of season ticket holders with 11,000. Only Torino had more than the Gialloblu. Of course, 2012/13 was the golden year for every Hellas fan, as they finally returned to the top flight after an 11 year struggle.

The hosts couldn’t have wished for a better start. The sold out Stadio Bentegodi (with 16,000 season ticket holders) was vibrant. Sadly, much of the discussion about this match was about what could potentially occur in the stands. Hellas supporters have a reputation of being extremely racist and derogatory to anyone who isn’t Caucasian or from their own city.

Fortunately, the fans were well behaved. The message from the supporters was to cheer and applaud players like Mario Balotelli whenever they touched the ball or committed an error. Sarcastic chants of “Mario! Mario! Mario!” could also be heard from the ultras.

The game itself was just as intense and entertaining as the atmosphere inside the stadium. Balotelli garnered even more attention with his assist for Andrea Poli’s goal. Not only was it the opening tally of the match, it was also the first of the new season. As a result, Poli was given 50 kilograms of honey from Udinese fan Gigi Nardini, which is handed out every year.

Verona didn’t back down from the pressure, nor did the home supporters. Off a corner, Jorginho picked out Luca Toni, who was (poorly) marked by Kevin Constant. The 36-year-old, making his debut for his 15th club, got above the Milan left back and aimed the header into the bottom corner past Christian Abbiati to level the affair.

Then, Bosko Jankovic picked out Toni again early in the second half, leading to the Italian’s second goal, again with his head. The lethal Verona counter attack had been punishing the Rossoneri all night, and it finally paid off for the home side as they walked out 2-1 winners against one of their bitter rivals.

“Running after a football, scoring goals, celebrating and suffering in a stadium has been my whole life,” Toni told Gazzetta dello Sport.

“As long as I am enjoying myself I will continue to do it. I know that there are certain sensations that only football can give you, so I will think very seriously before I walk away.

The latter may not be accomplished, as he’s only been able to score more than 10 league goals was back in 2008/09 when the 2006 World Cup winner was at Bayern Munich. What is possible, however, is to break the record for headed goals. He’s just three behind the record holder, Oliver Bierhoff. Toni had eight goals last season, meaning it’s very possible for him to grab four more to break the feat.

Verona may be on cloud nine, but Milan are once again in trouble in the beginning of another campaign. It wasn’t until late October in 2012/13 when the Diavolo were able to muster the best run of form in Serie A, before that coach Massimiliano Allegri was battling constant rumours about his job security.

It seems as if the 46-year-old going to have to deal with that for a second consecutive year. With many other teams strengthening to compete for both the Scudetto and a spot in next season’s Champions League, Milan may be left behind. The defensive woes were evident on Saturday, and while it may not be Allegri’s fault completely, it must be fixed. On set pieces last campaign, no other team conceded more goals than the Rossoneri.

They were also top of the list for number of headed goals conceded. They allowed 15 last year and have already sacrificed two. Since 2010, Milan haven’t won their opening match in Serie A, all of this could be traced back to Allegri.

The saving grace from all of this is that it was the Cagliari boss who guided them into third place, albeit controversially. There’s still 37 games left and if CEO Adriano Galliani let president Silvio Berlusconi make a reactive decision around 14 months ago regarding the manager, who knows how Milan’s season would’ve ended.