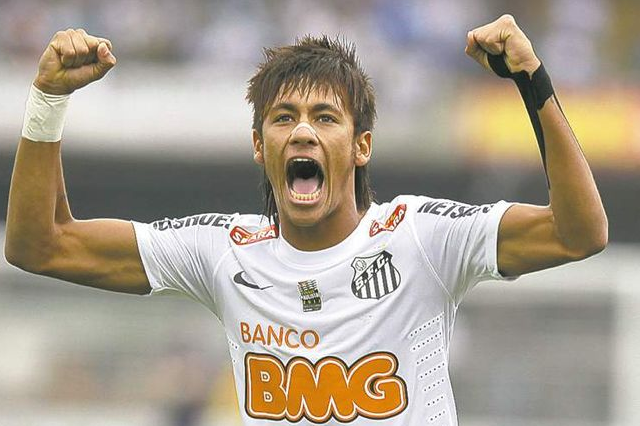 So the most dramatic transfer saga after Arsenal’s Fabregas of recent times has finally ended with the Brazilian sensation Neymar opting for Barcelona ahead of Real Madrid. This acquisition will definitely provide Barcelona with the adequate moral boost after their confidence were shattered at the hands of Bayern Munich in the UEFA Champions League semi final stage. Although he is sad about leaving his home club, the Brazilian says he has ‘butterflies’ in his stomach at the thought of playing alongside Lionel Messi, Xavi and Andrés Iniesta

According to the club’s official website, Neymar da Silva will be officially presented as a new FC Barcelona player on June 3rd after Brazil’s International friendly against England.

But the question now arises is that where will the Brazilian operate from in an already star studded Barcelona team? We look at three such possibilities from where the youngster can provide his services to the team.

As per reports Barcelona’s hunt for a striker continues even after the inclusion of Neymar as David Villa looks set to depart the Camp Nuo. This raises the possibility of an attack with the 4-3-2-1 formation with Messi and Neymar filling the gap behind striker, who would be the lone man in the strike. This would be a dream scenario for any striker in the world and would provide the Barcelona team with a balance, unmatched for by any side in the world. But who will that striker be ? When the likes of Zlatan have failed to live up to the expectation playing along side Messi, is there anyone out there currently to play as a forward for the Catalans?

At Santos Neymar has spent most of his time playing in the left flanks, cutting in and assisting the striker or coming in a scoring position himself. With Villa set to leave the club, this looks like the most likable role of Nyemar to lead the attack from the left side of the pitch with Messi in the centre. This sort of an attack would provide more versatility to the team and the prospect of Neymar playing in his favourite role would be even more lucrative. A quick reference for this role could be made to Ronaldo who is deployed in a similar position in Real Madrid and if Neymar could be even half as effective as Ronaldo, Barca would be the team to look out for.

This seems to be the most promising situation as it would also be ideal for Messi who has been deployed more in a central role these days.

Although highly unlikely, but still Tito could take every one for a surprise by engaging a 4-4-2 system with Messi and Neymar at the frontline of the attack. One thing for sure is that this would be the most lethal attacking combination in the world and Barcelona would send chills through other team’s spines with such a system. But again, its highly unlikely that such a formation would be implemented and at his first season with the club Neymar would not prefer that either.

Albeit, have Barcelona taken a huge gamble by signing Neymar? Brazil has always been a land of talents and strikers coming up from the South American continent have always made it to the biggest of stages in the world. But there have been equal number of flops as well. With the situation of Robinho, Pato still fresh in our memories, will Neymar be another hugely hyped Brazilian going down the barrel at the European league?

Well it is really early to judge about the 21-year old’s future, but there have been continuous cries from fans across Europe that Neymar is an overrated star ever since his mediocre performances at the Olympics and the International Friendlies against England.

What is your take on this?