Sunderland have identified Celtic’s promising young attacker Lewis Morgan as a primary transfer target, according to the Scottish Sun.

The 21-year-old signed for Celtic in the January transfer window from St. Mirren, following which he was loaned back to them till the end of the campaign.

Now, Sunderland are understood to have launched an approach to land the talented winger on loan for the next campaign.

The Black Cats endured a torrid 2017/18 campaign that ended with them getting relegated from the EFL Championship.

The Wearsiders have appointed Jack Ross as their new boss, and interestingly enough, he has managed St. Mirren before. And it seems like 42-year-old remains keen on a reunion with Morgan.

Morgan, a former Rangers’ youth product, has grown leaps and bounds since joining St. Mirren in the summer of 2013. His rise to the first-team with the Saints has been rapid and eye-catching. Having made his debut in a 2-1 defeat to Celtic in September 2014, the player has gone on to make 118 appearances for the club, netting 29 times and setting up 23 strikes in the process.

Morgan enjoyed his finest campaign till date in 2017/18, as he finished with 18 goals and 13 assists in 42 appearances across all competitions for St. Mirren. And his performances were more than enough to fire them back to the top-flight. 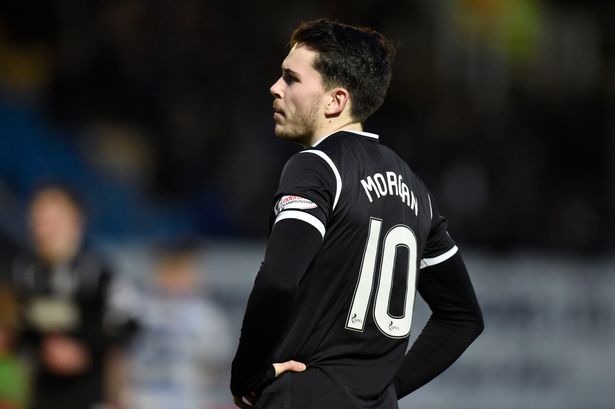 A winger by trade, Morgan is comfortable on either flank. The 21-year-old has also played as a No.10 on certain occasions, thus highlighting his versatile nature. His two-footed nature, athleticism and skilful dribbling make Morgan stand out as one of the most gifted players in Scotland.

Blessed with pace, technique and a keen eye for the goal, the two-time capped Scotland international could be a great asset to have in Sunderland’s attacking contingent.

Having gone down to the third-tier of English football, the Black Cats must bounce back to the Championship.

Currently, they only have the likes of Aiden McGeady and Callum McManaman to rely on in the wide areas. And considering Morgan’s impressive season with St. Mirren, having him in the squad could prove to be highly beneficial for Sunderland.