According to Mercato365, Arsenal have sent scouts to watch Guingamp’s Marcus Thuram, son of France and Juventus legend Lillian Thuram. Marcus, unlike his father, is a forward capable of playing anywhere across the front three. The report says that Arsenal representatives were present in Guingamp’s game against Bordeaux. The Gunners are need of a winger and have failed in their attempts to bring Inter Milan’s Ivan Perisic and Belgian wide man Yannick Ferreira Carrasco in last month’s transfer window.

With Thuram’s versatility of playing across the forward line and with star man Pierre-Emerick Aubameyang entering his 30s in June, Arsenal would see long term benefits from signing the youngster.

Thuram came through the ranks at Sochaux and represented the club in the Ligue 2. He moved to Ligue 1 side Guingamp in the summer of 2017 and has made 59 appearances for the club in all competitions. Thuram has mainly featured as a left forward for the French side but has been deployed as a number 9 too. 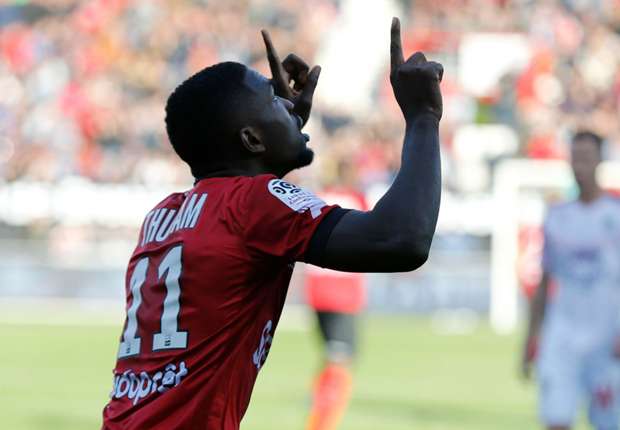 In his first season at Guingamp, Thuram started 20 times in the Ligue 1 and scored 3 goals and picked up an assist. He has considerably improved in his second season in the French top flight and has scored 7 times already. The Frenchman could hit double figures by the end of the campaign with 13 games still to be played.

Thuram is a powerful forward who possesses the deadly combination of speed and strength. He has been an important asset for Guingamp who play a counter-attacking system.

Thuram has made his name in the Ligue 1 for his exceptional dribbling skills and boasts more dribbles per game than Paris Saint-Germain superstar Kylian Mbappe.

Thuram has averaged a brilliant 3.5 dribbles per game, bettered only by Neymar this season. The 21-year-old has also averaged 2.1 shots at goal per game and also an incredible 3.5 aerial duels every 90 mins this season.

With age on his side and guidance from his father, one of the best players in the history of French football, Thuram has the potential to be the next big thing for France.

A move to the Premier League will help him take his game to the next level and under Unai Emery’s management, the Frenchman can expect a lot of game time like fellow Frenchman Matteo Guendouzi has this campaign.

Guingamp are currently at the bottom of the Ligue 1 and look destined for relegation this season. Thuram’s potential suitors will get him for cheap if he does move in the summer and Arsenal should have him as an option.