Aston Villa 0-3 Swansea City: The Villans bow out of the FA Cup

Aston Villa endured a tough afternoon at Villa Park as they were dumped out of the FA Cup by Swansea City on Saturday.

Two quickfire goals in each half helped Swansea ease past Aston Villa to book a spot in the next round of the FA Cup.

Dean Smith’s Aston Villa were right at the back foot in the second minute of the game with Courtney Baker-Richardson sliding in to turn the ball home after it had rebounded off him and the goalkeeper, Lovre Kalinic, who made his debut for the hosts.

Villa looked to respond straight away and Scott Hogan came close to grabbing an equaliser in the sixth minute. Hogan got in behind to meet Albert Adomah’s cross and the ball appeared to be going in off Erwin Mulder, but the Swansea goalkeeper recovered quickly to somehow scramble it off the line.

Swansea looked more threatening after the game had settled, with Leroy Fer sending a shot from the edge of the area over the bar before Bersant Celina saw his shot deflect wide. Alan Hutton made an excellent block to deny Baker-Richardson’s goal-bound shot in the 38th minute. 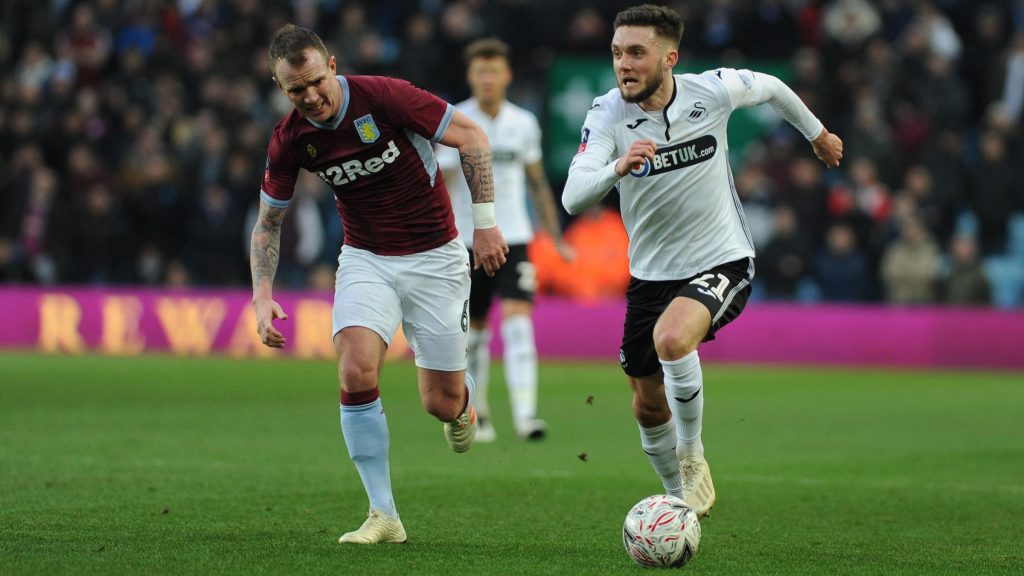 Aston Villa had crawled back into the game but Swansea were the better side and had to goal to show for their dominance at half-time.

Swansea started the second half exactly how they had started the first. Dean Smith’s Villans seemed to never learn from their early mistake and fell 2-0 behind two minutes after the restart.

Leroy Fer slipped a brilliant pass through to Nathan Dyer and he scored with a low drive past Kalinic to extend Swansea’s lead. The 2-0 lead gave Swansea more confidence and freedom as they dominated the proceedings.

Aston Villa, however, had a couple of half chances but never came close to scoring. Adomah did have the ball in the back of the Swansea net, but it was correctly ruled out for offside.

Read more: Shrewd by Smith – Aston Villa have taken a step in the right direction by bringing £3m star back to the club

But it was game over for the Villans in the 78th minute as substitute Jay Fulton added Swansea’s third goal after a sleek interplay with Fer.

Hugely disappointed with an early exit from the FA Cup, here’s how the Aston Villa fans reacted.

Get rid of Hutton now ffs

Bree, Whelan, Taylor and Hogan should be embarrassed of their performances today. That was easily as poor as anything Sherwood, Garde, Di Matteo or Bruce served up. Poor against Leeds, Preston, QPR and now today, very worrying.

Crap effort but we were never going win the competition so get out early. Please don’t offer Hutton a new contract #AVFC

Should refund the fans after that. Worst villa performance I’ve seen.

Shambles. Feel sorry for those who paid to watch it. Hutton and Whelan must go immediatley. Simple as that.

Worst performance Iv seen in a very long while !!! Shocking