Stoke City are currently in rich vein of form with the Potters winning their last two games. Gary Rowett’s side are now slowly and steadily making their way up the table. The Potters come up against Birmingham City in the Championship this weekend.

Birmingham are also on the back of a win against Rotherham United and a win against Stoke would take them above Rowett’s men on the table.

Sam Clucas, Ibrahim Afellay and Mame Biram Diouf are still out and will be unavailable for this game. However, Gary Rowett still has a plethora of options at his disposal for this game. A number of his stars would also be fresh after the international break.

Butland hasn’t looked the same since last season but he should continue in goal for the Potters.

Martina has improved after making the loan move from Everton this season. He should start at right-back once again.

Shawcross was benched for the last game and should return to the fold in place of Ashley Williams.

Martins Indi should partner Shawcross at the back for this game.

Pieters’ raids down the left flank have been fruitful for the Potters this season. More of the same is what Gary Rowett will want.

Fletcher will sit in front of the defence and dictate the play for the Potters.

Ince has picked up good form and has played a part in almost all of the last few goals. He is proving to be a massive asset for Stoke.

Though Etebo tends to get sloppy with his tackles, his work rate and drive make him an undroppable player in this squad.

The Welshman’s passing and distribution are unrivalled in this squad. He will pull the strings in the midfield.

Rowett will be glad to have McClean back after a long layoff. The midfielder possesses the drive and energy to devastate teams on the attack.

Afobe will be aiming to get back on the scoresheet in this game. He will lead the line for the Potters. 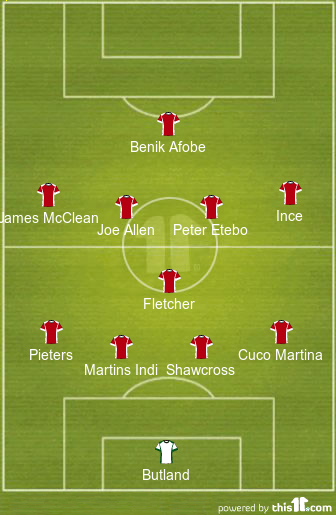