The 39-year-old is a Goalkeeping legend. Like a cat between the sticks, Buffon has won the World Cup before but revealed previously that this World Cup would be his last. With Italy falling short by failing to overturn a one-goal deficit against Sweden, Buffon, with 175 caps at the International level, missing out on a berth to the World Cup is a shame. Such as legendary player goes out on such a low. Oh! football can be so cruel at times.

Sanchez has been a key figure for Chile, denying Messi on two separate occasions to the Copa America title. Alexis has dragged Chile at times, kicking and screaming them to success, with 119 appearances at international level with 39 goals to add to his considerable goal tally at the club level.

Chile even failed to make it to a playoff position in the tough South American qualifying group. It is such a shame that the 28-year-old, with his mixture of pace, work ethic and a wonder of a right foot will not be gracing Russian shores anytime soon.

Make no mistake. Despite being 33 years-old, the former Chelsea and Real Madrid winger is a serious threat for opposition defences, and with 37 goals in 96 appearances, the left-footed wide man has called it time on his international Career following the Netherlands’ highly unsuccessful qualifying campaign.

It has been pretty dire for the Dutch following huge success at the 2014 World Cup under Louis Van Gaal. Robin Van Persie even arguably produced the goal of the tournament with a fantastic diving header. It is sad that the pacey wide-man could not fire an abysmal Netherlands into the World Cup. 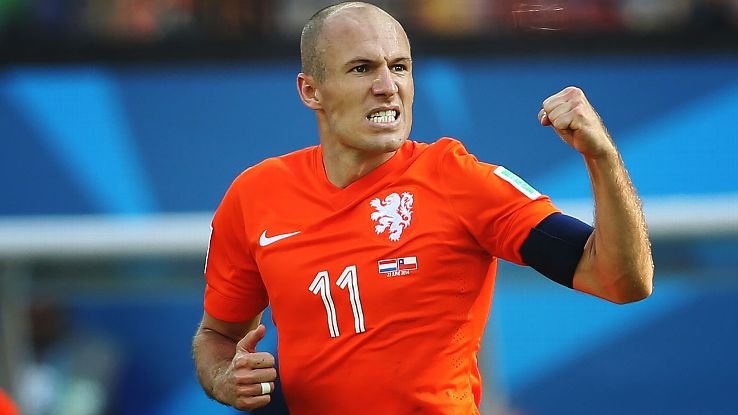 Bale is a brilliant, intelligent and integral player for any club and is also key to the Wales team. Bale has found his form quite late for Wales, with 26 goals in 68 appearances. But Bale has had serious trouble with injuries, denying him a chance to fire Wales into the grandest stage of all. But following their 1-0 loss at the hands of Ireland (who also went on to get knocked out) Wales could not replicate their exploits at the 2016 Euros where “the Dragons” reached the dizzying heights of the semi-finals.

Arguably the lesser known of the 5 names on this list, Pulisic, who plies his trade for Borussia Dortmund, is a new brand of tricky, fast American players in the Bundesliga. At 19 years-old with a healthy return of 9 goals from 20 appearances, Pulisic could become the main man for US Soccer in the future. Yet, the US and Pulisic are notable due to the fact that they are trying to set up a tournament with other World Cup rejects. So we could see all of the stars on this list still shine, but arguably on a smaller stage.