Why Dodi Lukebakio would be the perfect January signing for Fulham

Dodi Lukebakio was once again on target as Bundesliga relegation contenders Fortuna Dusseldorf put an end to Borussia Dortmund’s unbeaten run with a 2-1 victory last week. The Belgium-born Congolese striker has been making a lot of noise in the German top-flight and has made eyeballs turn with his consistent impressive displays.

A product of Anderlecht’s youth system, Lukebakio made his senior debut for his boyhood club in the 2015/16 season in the Jupiler Pro League. However, he spent time on loan at Ligue 1 club Toulouse and Belgian outfit Sporting Charleroi before making a permanent move to Watford in January last season.

Lukebakio made his Premier League debut for Watford last season against West Ham but the 21-year-old was loaned out to Bundesliga outfit Fortuna Dusseldorf at the start of the ongoing campaign. And the youngster has grabbed his opportunity with both hands, spearheading his team’s attack and finding the net on a regular basis.

The Watford loanee has scored 7 goals in the Bundesliga so far, with the hat-trick in the 3-3 draw against Bayern Munich being the highlight of his fine start to the season. Lukebakio became the first player in the history of the Bundesliga to score three goals in a single game past Manuel Neuer.

Standing at 6ft 2in, Lukebakio is a versatile, powerful and explosive attacker whose primary traits are his blistering pace, lightning acceleration and silky dribbling skills. A left-footed attacker, Lukebakio is capable of playing as an inverted winger down the right where he likes to use his pace and trickery to cut inside and has a crack on goal. He can also play as a conventional winger down the left and as a centre-forward too.

The 21-year-old has the killer instincts of a centre-forward and can leave the defenders for dead with his unpredictable movement in the final third, creating space with sharp turns and allowing others to exploit the gaps.

He has good upper body strength and always keeps the defenders on their toes with his agility and athleticism. Furthermore, Lukebakio is a clinical finisher and rarely misses the mark in 1 vs 1 situations with the goalkeeper.

To put things into perspective, Fulham can strike gold if they can use their financial muscle to cut his loan spell short and sign him permanently in January. Lukebakio ticks all the boxes to provide cover and competition for someone like Aleksandar Mitrovic. 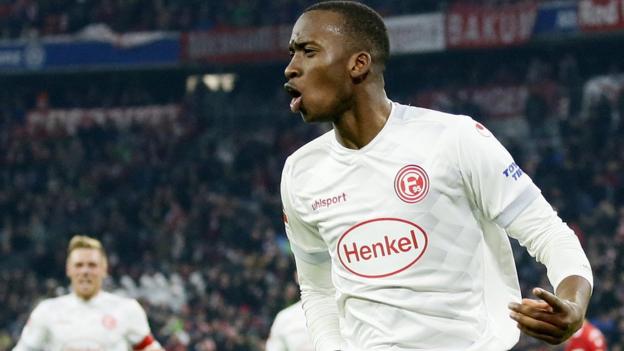 Fulham are currently going through a rebuilding phase under new manager Claudio Ranieri after the sacking of Slavisa Jokanovic and the Cottagers need some fresh faces in January to help them in their bid for survival in the top-flight. In fact, they need in-form players who can hit the ground running instantly and Lukebakio is doing a similar job for relegation contenders Dusseldorf.

Fulham spent a fortune in the summer to make the headlines with the singings of Aleksandar Mitrovic, Andre Schurrle and Jean Michael Seri. However, the Cottagers find themselves at the bottom of the table 18 games into the season and they need a quick turnaround of fortunes to avoid the drop.

That said, Fulham should start keeping tabs on this in-form Bundesliga striker as he might help them in their bid for survival.