April 2009. The title race between Liverpool and United was heating up. Manchester United vs Aston Villa, at the Old Trafford. The Red Devils trailing 2-1 and Cristiano Ronaldo equalises. The score at two all with 10 minutes left to play. A draw would have left Sir Alex Ferguson’s side one point behind league leaders Liverpool.

17-year old Federico Macheda, who was making his debut, had come on to replace Nani, with the score at 2-1. Coming on the back of a hat-trick for United Reserves the previous week, he was looking to make an impact for the senior side. And with just minutes left to play, the Italian received the ball with his back to goal just inside the Villa area, he turned and hit a sublime curling shot into the far corner. “Machedaaaaaaa” screamed an excited Martin Tyler on air. The teenager, with a moment of magic, had put United on top of the league table.

The dream start continued for Macheda, as just 46 seconds after replacing Dimitar Berbatov in his second substitute appearance against Sunderland, he put United 2-1 up. Two crucial goals in his first two appearances. Stuff of dreams.

The Mancunians eventually went on to win the league that season, finishing four points clear of Liverpool and consequently equaling their rivals with 18 league titles.

The Italian’s debut, that turned the title race on its head, made sure that huge things were expected from him. And with Carlos Tevez and Cristiano Ronaldo leaving Old Trafford the subsequent season, he was touted to be the next star to take United forward. 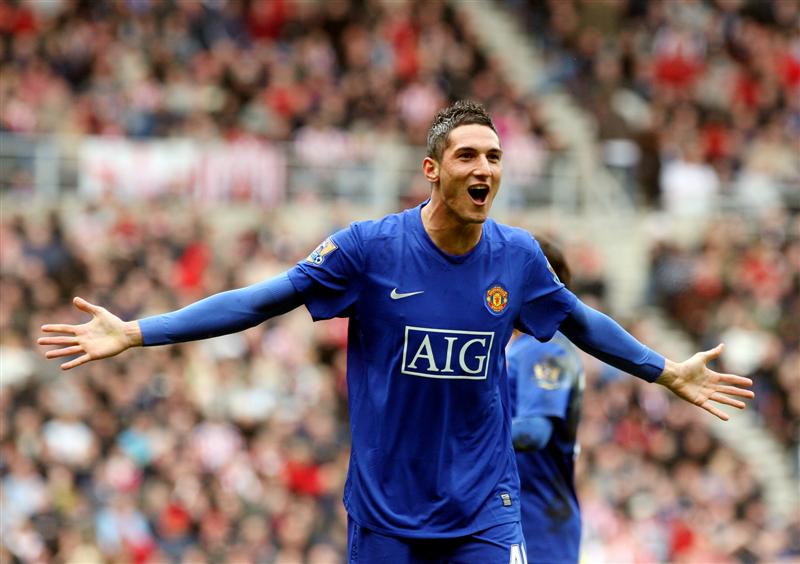 Unfortunately, with Wayne Rooney’s rise as United’s main man, Dimitar Berbatov’s superb goalscoring streak and the emergence of Javier Hernandez meant he had to look elsewhere for regular first team football, which saw him move back to his native Italy, joining Sampdoria in January 2011. He returned to his parent club at the end of the season, after an unfruitful spell with the Italian side, scoring just once in 14 appearances.

He was again loaned out in January next season, to fellow Premier League team Queens Park Rangers where an injury early into his spell meant his season was over. Another season came, another loan spell in January ensued, this time to German side Vfb Stuttgart. 18 appearances, no goals.

A career that began with such great promise had dovetailed into a string of failures following unsuccessful loan spells. With Sir Alex announcing his retirement after the 2012-13 season, David Moyes took over at United and made clear from the beginning that Macheda was not a part of his plans. Two more loan spells followed at Doncaster Rovers, where he managed to score thrice in 15 appearances over the two spells.

In January 2014, he was sent out to Birmingham City for the final six months of his contract, in what would turn out be his final loan spell as a United player. He scored 10 times for Birmingham in 18 appearances, helping them to stave off relegation.

His time with United came to an end with the youngster only managing 36 appearances for the first team across six seasons, finding the net only five times. His memorable injury time winner against Aston Villa was as good as it got for the former Lazio youth in a United shirt.

Released by the Red Devils, he was signed for Cardiff City in 2014 for free by former United reserves manager Ole Gunnar Solskjaer. He managed to score 8 goals for the Welsh club in the 2014-15 season. But having made no starts in the 2015-16 season, and a handful of substitute appearances, he was farmed out to Nottingham Forest for another not so successful loan spell.

Upon his return, his contract was terminated by mutual agreement ahead of the 2016-17 season. After being a free agent for months, Macheda on the 5th of December, was announced as a player of Serie B side Novara Calcio with an 18-month contract.

The 25-year old, after bursting on the football scene with a moment of brilliance at one of the biggest stages in club football, is now looking to revive himself in Italy’s second tier. How time changes. But with age on his side, the former United player can still make a comeback and resurrect his faltering career.