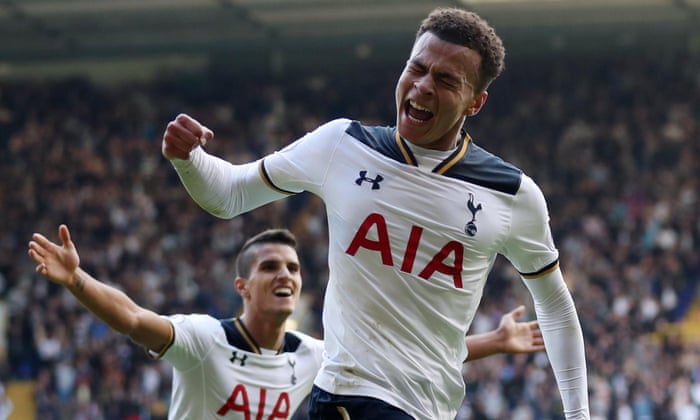 Mauricio Pochettino’s men have not been able to stitch victories together as they seem to have lost their scoring touch in front of goal. They managed to put 5 past Swansea in the previous round of the Premier League but the manager will know that his team will have to be better leading into this busy festive season in England.

As if that was not enough of a problem, French giants PSG are now reportedly plotting a big money move for one their first team stars. According to the Guardian, the English midfielder, who signed two new contracts already this season at the White Hart Lane, is a £50m transfer target for the Paris-based outfit at the end of the season.

The 20-year old is into the 4th month of his new contract that runs for 6 more years and is an established first team player at the club for more than a season now. He earns 60,000-a-week in England at the moment and PSG are ready to improve on it substantially after looking at his meteoric rise into one of the best midfielders in the country. He is a first choice midfielder for club and country and is has already drawn comparisons with some of the best players in the world. At 20, he has a huge career ahead of him and here is why Pochettino will never let him leave. The Argentine is slowly building a team that can rule the domestic league for years to come. The likes of Harry Kane, Christian Eriksen, Erik Lamela, Dele Alli, Toby Alderweireld, and Eric Dier are relatively young in their career and are playing together on a regular basis. It is the core of the side for more than a year now and the manager is prepared to give them enough chances to contribute even when out of form. Having played 41 games already in the Premier League for the club, the Englishman is in the midst of the plans at the club with his versatility being a major advantage.

A genuine attacking and creative midfielder, Dele Alli has 4 goals and 2 assists in 23 games in all competitions this season. He is a natural finisher and has scored some of the best goals in the league in recent times. His ability with the ball, coupled with his vision and accuracy make him a top class midfielder and his tackling and understanding of the game allow him to sit back into a deeper role if his teams needs. He is well settled in London, fighting for a place in the first team of the national side and if he can continue to impress for a couple of years, he will easily become one of the best in the world.

A £50m price tag would be tempting but Pochettino will know that he has enough potential to earn him more than that in a few years and will do all that he can to keep him at the Lane.

Do you think Dele Alli will move to PSG?