According to a report in Liverpool Echo, Everton are interested in bringing Huddersfield Town goalkeeper Jonas Lossl to Goodison Park during this summer transfer window.

The Blues are aiming to perform a reshuffle in their goalkeeping department, with Lossl being one option to add. The 30-year-old is a free agent and could join any club on the basis of wage agreement. (h/t Liverpool Echo) 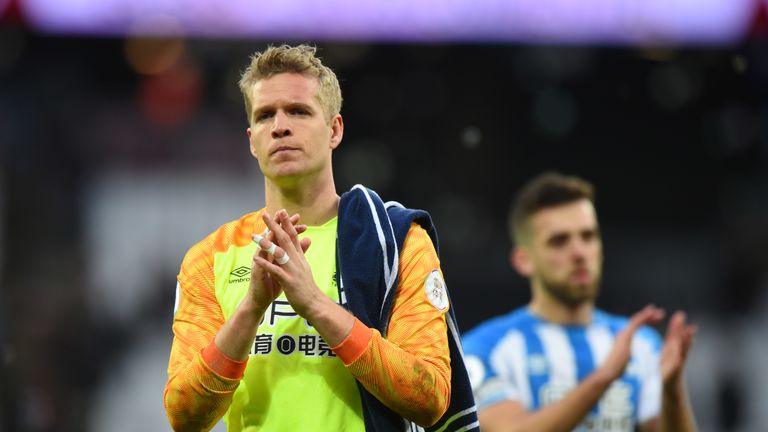 Maarten Stekelenburg has been deputising Jordan Pickford up until the end of this season. However, the former Dutch international is now 36 and only has one year left on his contract. (h/t Liverpool Echo)

On the other hand, U23s’ stopper Joao Virginia is set to get promoted to the first-team. But Marco Silva confirmed that the youngster could be out on loan ahead of next season. (h/t Liverpool Echo)

Hence, even though the Toffees might end up requiring a backup for Pickford, here’s why they shouldn’t sign Lossl this summer:

Lossl has been error-prone in the Premier League

Jonas Lossl has spent the past two seasons in the Premier League with Huddersfield Town. The Terriers are now relegated back down to the Championship

Now, if we analyse the Denmark international’s performances in the past 18-24 months, it is a mixture of good and the bad. While he is good in saving shots, the 30-year-old has been susceptible to errors made that led to chance or a goal to the opposition.

Furthermore, he has been a bit twitchy when corners and set-pieces are thrown into the box. It means that the physicality allowed in the Premier League didn’t help him to really command the box with confidence. This is not the first time a keeper struggled from crosses coming in.

With only 14 clean sheets in 69 appearances and six errors that directly led to a goal (Premier League), Lossl is not really exhibiting great numbers in his time in the English top-flight.

Hence, it doesn’t make sense for Everton to sign the 30-year-old this summer, be it on a free transfer. They must look for better options as a backup to Pickford.