What to do, what to do? At the time of year when the season draws to a close, it seems that due to the lack of football about the only thing that can keep us from going into a state of chronic dementia is the giddy delerium that surrounds the transfer window. With the air awash with ridiculous rumours, tenuous transfer links and Brian Swanson going mad on the SkyPad it is sometimes hard to seperate the wheat from the chaff in terms of genuine transfer gossip.

So whilst all of the big clubs will be seemingly linked with every FIFA licensed player on the planet, I have taken the liberty of penning a shortlist of five names that might actually do a job at the very top that perhaps would not have been considered by many.

As far as goal records go, this guy is perhaps one of the most exciting and promising strikers in Europe. With a staggering 31 goals in 30 games, Bony has been terrorising defences in the Eredivise all year with his frightening combination of pace, power and aerial ability. Comparable to players like Drogba, his physical presence combined with his skill on the ball makes him virtually unplayable on his day. At 24 years old, Bony looks like he has outgrown his current club and I would be surprised if he wasn’t at one of Europe’s top clubs by the end of the summer. With Vitesse resigned to losing their star man, and with the asking price at £10million- surely someone will take a gamble on the big Ivorian.

A personal favorite of mine. Signed from Racing Club as a virtually unknown entity in this country- Yacob has settled quickly and has rapidly turned into one of the Barclays Premier League’s most impressive midfielders. A man much in the mould of Javier Mascherano, Yacob is one of those players that often goes under the radar but is nevertheless vital to his team. Blessed with excellent passing ability and an uncanny knack of sweeping up everything in front of his defence, Yacob’s industrious showings were vital in an excellent season for the Baggies. With reported interest from Man United, Athletico Madrid and you can expect to see Yacob snapping at the ankles of opposition players at one of Europe’s top clubs soon. 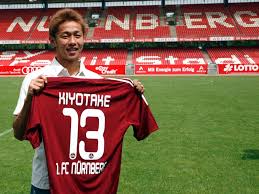 One of the brightest stars in a new wave of Japanese talent coming through, Kiyotake joined Nuremberg from Cerezo Osaka in his homeland. Kiyotake has adapted incredibly impressively to the demands of European football, and was the standout player in an impressive season for his club (clocking in 4 goals and an impressive 11 assists). A small nippy player, with an eye for a killer ball and a knack of popping up with vital goals- at just 23 he is an attractive prospect for most top European clubs and he has already racked up 12 caps for his national side. Like fellow countrymen Keisuke Honda and Shinji Kagawa before him- this young Japanese prospect looks destined for big things.

If you were to sum up this guy in one word, the word selected would probably something along the lines of “monster”. The young Senegal international is quickly gaining a reputation as one of Europe’s most formidable young defenders, and looks set to join to bigger club in the near future. A man of formidable stature (standing at a mammoth 6 foot 4) Kouyate makes a living out of bullying quivering opposition attackers into submission with his phenomenal strength and supremo like aerial ability. It is also worth noting that Kouyate is one of the fastest centre backs in the game at the minute, so apparently you can neither hide or run from Kouyate. He certainly is an ominous prospect for strikers everywhere all over Europe.

This may seem a strange one, but Maloney has had a remarkably successful season at Wigan (despite the relegation). A very dangerous set piece taker and a quick and nippy player with the ball at his feet, his versatility across the midfield and tremendous ball skills means he has been a valuable asset to Wigan this season. 6 goals and 9 assists from midfield is not a bad tally in a relegated side, and whatsmore Maloney’s marauding play means that he offers much more than statistics on the pitch. Despite being in the autumn of his career (being just the wrong side of 30), he is surely worth a punt for any Premier League club to get at a cut deal price- now Wigan are in the Championship?

So, some alternative food for thought in terms of transfers. Would you like to see your club linked to any of these names?