Chelsea continued their juggernaut in the Premier League, as they notched up their 12th consecutive win since October, defeating AFC Bournemouth 3-0 at the Stamford Bridge. The Blues, without Diego Costa and N’Golo Kante, two of their most influential players, went ahead on the 24th minute thanks to Pedro. The Cherries, however, did not give in and put up a fight with Jack Wilshere coming close.

Things got easier for the home team after the restart though, with Eden Hazard doubling their lead before Pedro added more gloss to the scoreline in the injury time to make it three. Chelsea continued to pull away from their competitors with another impressive performance, whereas one might say the final score did not to justice to Eddie Howe’s men who showed heart throughout the match.

Here are five pictures that sum up the evening at Stamford Bridge: 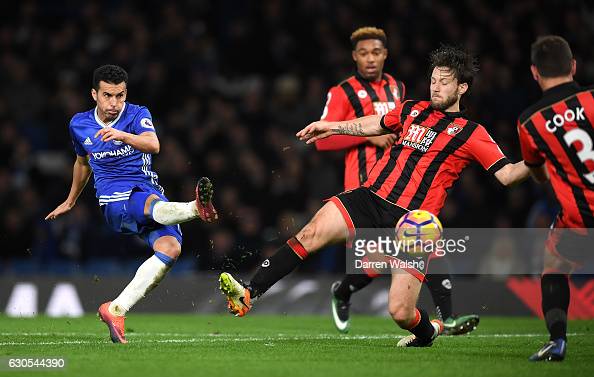 Chelsea began the game on the front-foot and were soon rewarded for their enterprise in the attack as Pedro, who replaced the suspended Diego Costa at the top for the Blues, received the ball from Cesc Fabregas on the edge of the box and put it past Artur Boruc in the Bournemouth goal with a stunning effort that curled on its way into the top-left corner.