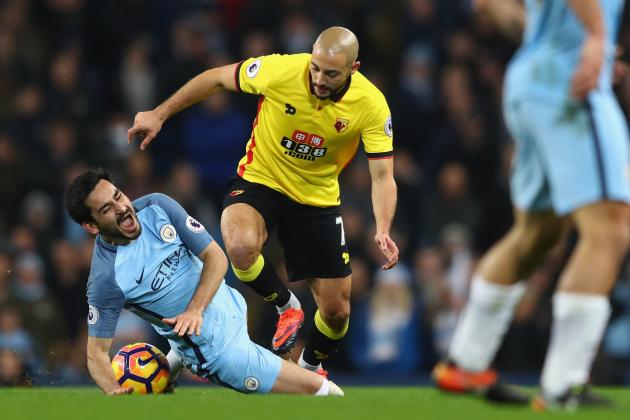 After a small dip in form, Pep Guardiola’s Manchester City were back to winning ways earlier in the week as a comfortable 2-0 victory over Watford kept them in the top-4 places in the points table. The manager will hope that his side can keep up the good work till the likes of Fernandinho and Sergio Aguero are back from suspension but Guardiola was dealt yet another blow this week after it was revealed that midfielder Ilkay Gundogan picked up a serious injury. The 26-year old German international picked up a cruciate ligament injury and is now ruled out for the rest of the season with the player requiring a surgery.

This will leave Guardiola a bit short of midfielders in the side going into the rest of the season and the manager is now facing a big dilemma. Spending in the January transfer window is hardly an issue for a club like Manchester City but Guardiola will know that he will need a player who can walk into the first team at the club in January, something that is hard to find in the middle of the season. There will be a number of top class players who will be ready to make a move to the Etihad, but they will take their time to settle into the new club and this might affect their chances at the top of the table.

This is a conundrum that will give Guardiola a number of sleepless nights this season but in all honesty, he need not have to look too far away from his own squad for replacements. Fernando and Fernandinho have been used in a defensive midfield area, and neither can take up the place of Gundogan in the squad leaving just one player with a chance to walk into the side. Ivory Coast international, Yaya Toure, should be the man that Guardiola trusts in Gundogan’s absence this season. Having played 200 games at the Etihad already, the former Barcelona man was once pushed out of the Spanish outfit by Guardiola so it was clear that at 33-year-old is not really in the plans of the manager at the Etihad this season. But Toure showed in his few appearances this season that he is still capable of playing at the highest level in the league. He is not the quickest anymore in the midfield but his vision, technique and ability with the ball, still make him one of the most effective players in the league this season.

He scored a brace on his debut under Guardiola at the Etihad this season and was also impressive in a couple of substitute appearances claiming a regular place on the bench. But with Gundogan injured, Guardiola should not hesitate to get Toure back into the first team. The manager needs his players to be quick and slick in their passing while he needs his midfielders to be on their toes to win the ball back as soon as they lose it. Toure can help turning City’s attack into a title winning one but he might make their defense and bit more vulnerable.

But every player has his own shortcomings and there will not be too many players ready to move in January that can provide what Toure can at the club this season. His experience in the English league along with his seniority at the club will help him command the midfield for his side and unless Guardiola can get in one of the best midfielders in the world, he is well advised to stick with Toure and spend on an understudy.

Do you think Guardiola should ignore Yaya Toure and spend big on a midfielder in January to cover for Gundogan this season?