Chelsea booked their place in the quarter-finals of the Carabao Cup with a 3-2 victory over Derby County in what turned out to be an exciting battle at the Stamford Bridge.

The Blues took the lead when loanee Fikayo Tomori sliced a Davide Zappacosta cross into his own net, but Derby hit back immediately through Jack Marriott.

Chelsea went ahead again, this time with Richard Keogh putting through his own net from another Zappacosta cross. But Frank Lampard’s Rams were not behind for much longer and levelled through Martyn Waghorn.

Maurizio Sarri’s Chelsea took the lead for the third time through Cesc Fabregas and withstood Derby’s barrage at the death, with substitute David Nugent hitting the post late on.

Not much chance with either Derby goal, but made a couple of really smart saves — most notably Jack Marriott’s in the second half — to keep Chelsea ahead.

He had a hand in all three of the first half goals, playing in the crosses for the two own goals. Surged forward every time he got the ball. Defensively, he was suspect at times.

Cahill played a sloppy ball to Fabregas for the opening Derby goal. He improved after the break but his passing was not up to the mark and never inspired.

Just like his centre-back partner Cahill, Christensen was defensively all over the place. Lacked confidence in whatever he did and was substituted in the second half.

Always looked a danger going forward and whipped in some devilish crosses into the box. However, Emerson struggled defensively as he was caught out of position a few times.

Not at his mercurial best as he lacked his usual range of passing. Lost possession at times; although Kante improved after the interval.

Cahill played him an awful ball that led to the opening Derby goal. Otherwise, Fabregas was decent in the middle of the park as he effortlessly pinged balls in every direction. Scored a good goal just before the break which eventually turned out to be the winner. 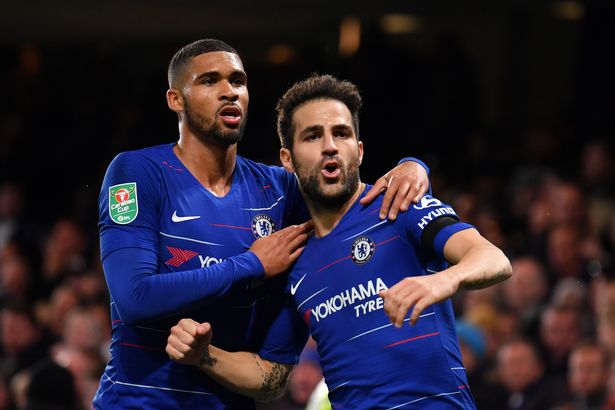 Saw plenty of the ball as Kovacic enjoyed a bright start to the game. However, his influence faded as the game wore on that allowed Derby to get a foothold on Chelsea.

Deployed in a more advanced role and he certainly made the most of his chance, again. Showed great strength to hold on to the ball and some of his deft turns and twists were a delight to watch. Loftus-Cheek was a constant menace with his driving runs into the box.

Showed great energy and intensity but he wasn’t near his sublime best. Too many sloppy passes and wasted opportunities summed up Willian’s night.

Linked up with well at times with Willian and while he looked isolated for much of the game, Morata hardly tried to get into the game. He had a header saved late on in the game.

Replaced Christensen in the 66th minute and brought a calming influence to the Chelsea defence which was badly needed.

Came on for Loftus-Cheek but hardly did anything.

Replaced Zappacosta with 12 minutes on the clock and added solidity to the backline.