According to a report by Football.London, Tottenham Hotspur are interested in signing Eintracht Frankfurt attacker Ante Rebic this summer. The 24-year-old is currently in Russia to represent Croatia in the ongoing World Cup. He opened the scoring for Croatia in their 3-0 win over Argentina on Thursday by volleying home after a mistake by opposing goalkeeper Willy Caballero.

The report further states that he could cost in the region €30m – out of which a certain percentage will go to his former club Fiorentina. Now, Spurs chairman Daniel Levy is known to be a calculative spender but should he splash the cash for Rebic?

Tottenham have finished in the top-four for the last three seasons but there has been growing pressure on Mauricio Pochettino and his men to win trophies. To do so, they must decrease their reliance on talisman Harry Kane. Thus, let’s take a look at Rebic’s profile and see if he is good enough to join the north London club.

Who is Ante Rebic?

Born in 1993 in Croatia, Rebic started his career by playing for a few local clubs before joining Hajduk Split’s youth team.

His impressive displays attracted RNK Split, who opted to sign him later on. Rebic rapidly progressed through the ranks and in 2013, he joined Italian outfit Fiorentina. But he featured sporadically for the Italian outfit in the 2013/14 season and was sent out on a loan to RB Leipzig the following summer.

Rebic didn’t feature much for Fiorentina upon his return from Germany as La Viola loaned him out once again in January 2016, this time to fellow Italian club Hellas Verona. Rebic failed to score a single goal in 9 appearances for Hellas Verona. He then spent two loan spells at Eintracht Frankfurt, who liked what they saw and made the move permanent this summer.

What is his playing style?

There are certain aspects of his game which are absolutely commendable but then again, there are things he needs to work on. His passing range and accuracy are excellent and he is blessed with blinding pace. 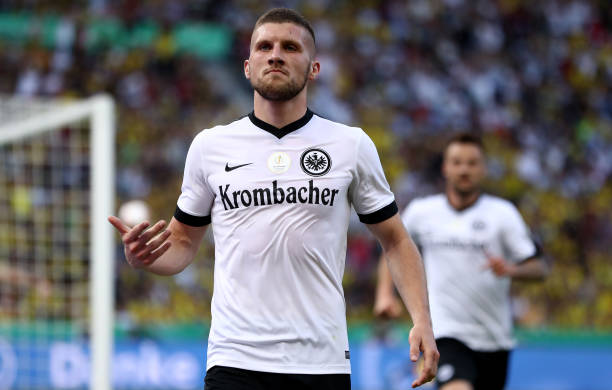 Rebic’s dribbling skills are top-notch and he never shies away from surging past opposition defenders to work wonders in front of goal. But the forward needs to work on his finishing skills. And more often than not, Rebic loses possession of the ball which could lead to costly mistakes in counter-attacking situations.

Rebic has potential no doubt but perhaps for €30m, Tottenham can do a lot better. There have been times when he failed to score for a good number of matches – and it will be a risky endeavour for Spurs to sign somebody with such a track-record.

Deputizing for a player of Kane’s calibre will be a tough task and it does not seem like Rebic is quite there yet. On the flipside, Pochettino is known to bring the best out of his players but with the pressure to win trophies, can he afford the time and patience required to do so?