Belgium beat England 2-0 to clinch third place in the 2018 FIFA World Cup in Russia, courtesy of goals from Thomas Meunier and Eden Hazard on Saturday.

Having fallen shy of making their maiden World Cup final appearance due to a 1-0 defeat to France earlier this week, the Red Devils’ golden generation stepped up to achieve the nation’s best-ever finish in a World Cup tournament, bettering the fourth-place finish achieved back in 1986.

Both Roberto Martinez and Gareth Southgate named largely unchanged sides and it was Belgium who started the game strongly, with full-back Meunier handing them the lead as early as the fourth minute. The PSG star got on the end of a lovely cross from Nacer Chadli to finish past Jordan Pickford.

England captain Harry Kane had a great chance to get his team back on level terms, after being played in by Raheem Sterling following some intelligent play. But the World Cup’s leading goalscorer scuffed his effort wide of the mark.

Toby Alderweireld came close to scoring at the other end, with his effort flying over the bar, while Romelu Lukaku also missed a glorious chance to close down on Kane’s goal tally after being played in by Kevin De Bruyne, as Belgium went into the break with their lead intact. 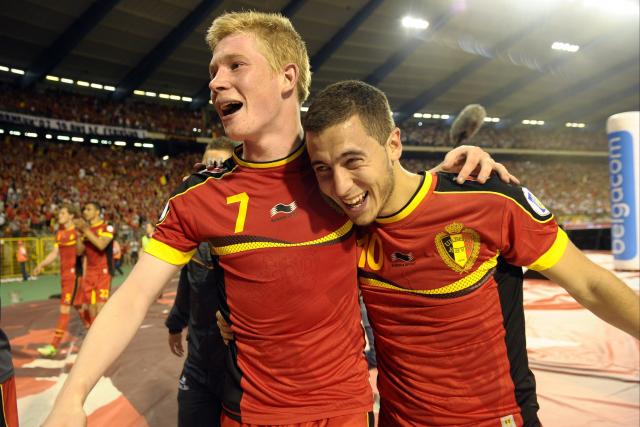 Southgate responded by introducing Manchester United duo Marcus Rashford and Jesse Lingard after the break. And the latter almost made an immediate impact after coming on, when his rasping drive across the goal narrowly evaded Kane’s boots.

At the other end, Lukaku spurned another great opportunity, after being played in brilliantly by De Bruyne once again. That turned out to be the burly striker’s last action, as he was replaced for Dries Mertens.

With England struggling to find a way back into the game, midfielder Eric Dier almost managed to reinstate parity with twenty minutes to spare. The Tottenham Hotspur man burst through on goal and dinked the ball over Thibaut Courtois in a one-on-one situation, only to see club teammate Alderweireld hack the ball off the line.

Jordan Pickford them came to England’s rescue, pulling off a brilliant one-handed save to deny Meunier a second goal on the day and keep the Three Lions in the game. However, it would come to matter little, as Belgium captain Hazard made no mistake after being sent through by De Bruyne in the dying embers of the match to put the game to bed and end his team’s journey on a high.

Here’s how the fans worldwide reacted to the match on social media.

But Harry Kane was no where to be found

He was roaming about like an Observer in Ekiti Elections. #NFFCShow

England are a good team and an improving team but Belgium are an accomplished, mature side who have been a class above today. England have had a great tournament. Now it's time to try to climb a bit higher.

Congratulations to @hazardeden10 as he scores in Belgium's 2-0 win over England and helps the @BelRedDevils clinch 3rd place at the #WorldCup #BELENG pic.twitter.com/amGLLGBg1F

England lost to Belgium twice and to Croatia. They beat Panama, Tunisia, Colombia and Sweden. Yet people are acting like this was some massive achievement. They beat teams they should beat and got spanked by good teams. How is that amazing? #Eng #Bel #BELENG

The difference between Lukaku's Belgium and Kane's England is that Belgium worked hard to get here while England were luckily pitched against easy teams. Belgium deserves the bronze #BELENG

Breaking News: FIFA announce that England and Belgium will no longer be allowed to play each other because when they do soccer dies a little. #ENGBEL

#BELENG Belgium were by far better side.England was once again exposed as a mediocre team with no ability to score beyond set pieces.Kane could score against lowly Panama & Tunisia. In the final analysis England proved to be overrated &over hyped. To be exact"Paper lions at best