Arsenal have had a rather weird season so far and despite many expecting them to be worse off than they are at the moment, they have done well so far. However, they need time to fully adjust to Unai Emery’s tactics. A 4-1 victory over Fulham on the 1st of January doesn’t tell the entire story though, especially given the fact that defensive issues still remain in the Arsenal side.

With six injuries to their name, Arsenal and Unai Emery will face a tough time rotating the squad but with the side given a break after their clash against Fulham on the 1st of January, there should be a few first-team stars making an appearance.

The former Chelsea man has been effectively replaced by Bernd Leno in goal in the Premier League and has thus become their cup goalkeeper.

The 34-year-old was rested against Fulham following the 5-1 defeat to Liverpool and should replace Maitland-Niles at right-back.

Shkodran Mustafi injured his hamstring in the game against Fulham. Hence, Sokratis should keep his place in the starting line-up for this FA Cup tie.

Recently returning from an Achilles tear, the 33-year-old should continue making appearances in nearly every game until Arsenal sign another centre-back to play alongside Sokratis.

The versatile youngster has finally been able to nail down a regular position, thanks to a myriad of injuries. He should make yet another appearance but this time at left-back against Blackpool.

Another talented youngster, the 19-year-old has won plaudits for his performances since his arrival. While he has been replaced by Lucas Torreira in the Premier League, the FA Cup will allow him to shine.

The Egyptian has struggled to make an impact under the new manager. The FA Cup could be a chance to showcase his talents.

Like many other Arsenal youngsters, Rowe has been given chances in the Carabao Cup and the Europa League to prove himself and has done well, scoring three goals in six appearances. He should start in the FA Cup as well.

While he may be a star on the move, Ramsey’s playtime at Arsenal certainly hasn’t diminished in the light of recent injuries to both Mesut Ozil and Henrikh Mkhitaryan. Should start this game.

A wildcard choice, the 17-year-old came off the bench for his Premier League debut against Fulham making him the first 2001-born player to ever play in the Premier League.

Read More: Why this 20-year-old Champions League winner could be the man to solve Arsenal’s defensive woes

The Frenchman has struggled to find the net, with a seven-game drought ending at Fulham. Playing against a League one side should be a boost to his confidence. 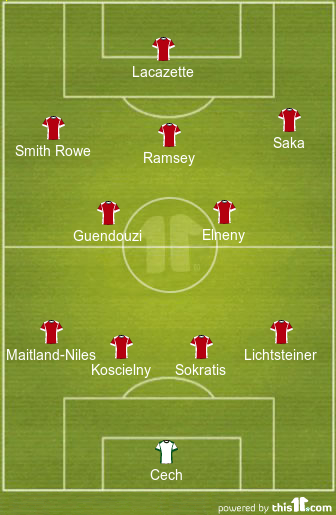