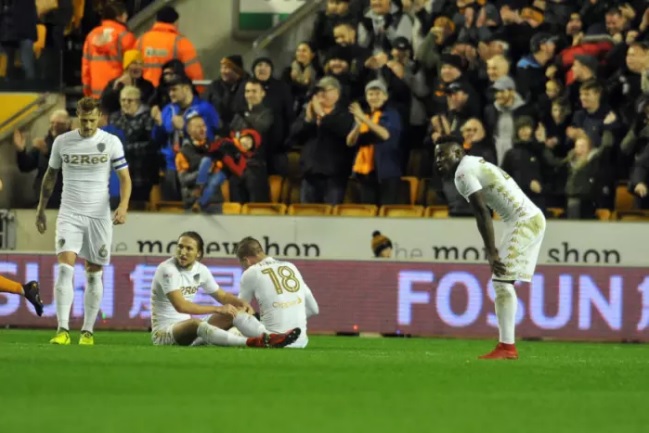 Effective Berardi, Disappointing Lasogga – The best and the worst-rated players as Leeds United lost 3-0 to Wolves

Leeds United slumped to another defeat on Wednesday night as they were beaten 3-0 by the league leaders Wolverhampton Wanderers. Leeds were not able to get a glove on the visitors in the first-half, as the team from the Midlands scored 2 goals from set pieces.

Stuart Dallas missed his header to allow Cavaleiro to slot home with ease and then Willy Boly rose higher than any Leeds defender to head in the second goal. The half also saw Leeds captain Liam Cooper go off with a leg injury to round out a wretched half for the men in white.

In the second half, the players responded positively but were never able to seriously test the Wolves goal. Benik Afobe made sure of the result in the second-half with a beautiful goal after coming on for his sixth appearance for Nuno Espirito Santo’s men. And although Leeds attempted to rally later on, it was far too little too late.

Performed well on only his second start for Leeds, kept the score respectable in the first half. Was unable to keep Wolves at bay throughout the game and he needed more support from his defenders.

Hit the bar in the second half and took over the captaincy when Liam Cooper went off. He wasn’t to blame for this loss and ran himself into the ground for his team.

Ended up on his back for the second goal when he needed to be heading the ball away, and was then done for pace by Benik Afobe for the third goal.

Went off after 30 minutes when he went down in the box after a fairly innocuous challenge with his own player. Worryingly enough, it looked like ligament damage. Replaced by Matthew Pennington.

Offered very little going forward and was unable to cope with the delivery and quality of Barry Douglas.

Did his best but was overrun in the midfield area for most of the game. Not a game he would like to remember.

Got a yellow card for a horrific tackle early on in the game and wasn’t able to impose himself after that. Found himself chasing shadows at times.

Hardly touched the ball in the first-half and was duly replaced by Hernandez at halftime.

Lost the ball a lot in the first-half. The team seemed to look to him to be the creative hub but he offered little. Improved slightly with Hernandez on the field.

Lost his marker for the Wolves goal but could have halved the deficit in the second-half, had he managed to connect with a cross from Hernandez. Lots of industry but very little quality.

Lumbered around for the whole time he was on the pitch, didn’t get any service but didn’t offer anything either. Seemed like he couldn’t be bothered tonight.

Came on in place of Cooper and was unable to stop centre-back Willy Boly from getting the second goal. He also could have done better on the third goal.

Had an immediate impact when he came on as Leeds improved in the second half. Began to fade as the half went on.

Not on long enough to make an impact but he did have one of Leeds’ very few shots on target.