According to a report in ESPN, Premier League champions Manchester City are closing in on a summer deal for Atletico Madrid midfielder Saul Niguez. The Cityzens are ahead of La Liga champions Barcelona in the race to sign the Spanish international.

Manager Pep Guardiola has identified Saul as a long-term replacement for Fernandinho. He initially wanted Frenkie de Jong from Ajax, but the Catalans took the Dutchman away from him (h/t ESPN).

While Atletico Madrid are looking to raise funds by selling players, they are holding out for around €120m for the midfielder, but it seems that a fee around €80m would be enough to finalise a transfer. And Manchester City are the front-runners.

So, here’s a dream City line-up, featuring him and probably Ben Chilwell, who has also been linked (h/t Daily Mail) with a move to the Etihad.

He is their first-choice keeper and would remain that way come the start of next season.

The Englishman was bought for big money in the summer of 2017 and has been the first-choice right-back since. He is a certain starter in that position for the Cityzens.

Stones epitomises the way Guardiola likes his centre-backs to play. He is ahead of Nicolas Otamendi and Vincent Kompany in the pecking order.

The Frenchman has been a colossus at the back for the Cityzens and will continue to be in the years to come.

With constant injury problems to Benjamin Mendy, it would make sense if the club signs Chilwell from Leicester City in the summer.

Saul could be brought in as a replacement for Fernandinho, who will be 34 years old by the start of next season. Hence, the former should start more games than the latter.

It has been an injury-hit season for De Bruyne, but he still remains one of the best players in the team. Hence, the Belgian international is expected to play a key part.

He is like a fine whine who gets better with age. The retired Spanish international still remains one of the key players in the team despite being 33 years old.

The Portuguese international has been one of the main players in the team, especially in the past six months. He should certainly start on the right wing ahead of Riyad Mahrez.

He continues to put the ball into the back of the net, hence, should keep Gabriel Jesus out of the team. The Argentine continues to be City’s main man up front.

On the evidence of this season, Sterling has been head and shoulders ahead of Leroy Sane. The Englishman has taken his game to another level and is reaching his prime age to drive City to greater heights in the next few years. 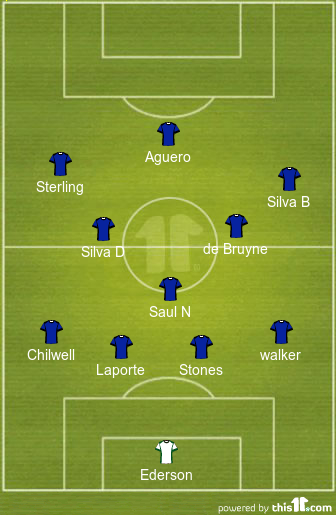