Wolves welcome Burnley to the Molineux on Sunday as they look to maintain their good start to the Premier League campaign.

The Wanderers have a step in the Europa League after defeating Torino 3-2 in the play-off first-leg in Italy on Thursday. Before the Torino game, Nuno Espirito Santo’s side held Manchester United to a 1-1 draw at the Molineux on Monday.

Burnley, meanwhile, have picked up three points in two games and will head into Sunday’s fixture on the back of a 2-1 defeat to Arsenal.

Matt Doherty missed the game at Torino, perhaps as a precaution after he was forced off with illness at half-time against Manchester United. However, he should be fit to face Burnley.

Patricio is Wolves’ undisputed No.1 and he should start against Burnley on Sunday.

Doherty is one of the most trusted members of Nuno’s squad. After sitting out the Torino game, he’ll be fresh to start at the weekend.

A leader at the back, Coady will be tasked with keeping the in-form Barnes at bay.

Bennett is a regular fixture of Wolves’ three-man backline and is certain to keep his place in the team.

Boly has been a vital cog in the Wolves defence and is expected to start against the Clarets.

The industrious Spaniard is an undoubted starter at left wing-back for the hosts.

Moutinho’s presence in the middle of the park helps Wolves tick all-round. He is a sure starter on Sunday.

Scored an absolute beauty from outside the box in the 1-1 draw with United. Neves will look to control the game and get on the scoresheet again.

Dendoncker gives Wolves’ midfield a bit more security and robustness. He will be a threat to the opposition during set-pieces.

Scored in the 3-2 victory over Torino in Italy on Thursday. Jota should keep his place in the team.

Like Jota, Raul also found himself on the scoresheet against Torino. He’ll be looking to make a difference against Burnley at Molineux. 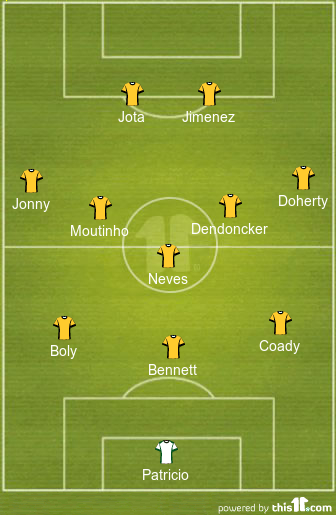