Why Leicester City should consider selling Islam Slimani this summer

When Leicester City signed Islam Slimani from Sporting Lisbon in the summer of 2016 for a fee believed to be worth in the region of £29million, it made complete sense. After scoring 27 goals in 33 league appearances for Sporting, Slimani was expected to arrive at Leicester and take the Premier League by storm.

Before moving to Leicester City, Slimani, in an astonishing three-year journey, had gone from an unknown quantity in the Algerian league to the most feared centre-forward in Portugal. Due to his clinical finishing, aerial abilities and overall attributes, there was a heavy weight of expectation placed upon the shoulders of the Algerian when he arrived in England.

However, Slimani failed to live up to the hype that surrounded him and has endured two frustrating years in the Premier League. But he didn’t make a bad start to his Leicester career as the 30-year-old netted a brace in the 3-0 home win over Burnley in only his fourth appearance before scoring against FC Porto in the Champions League.

The dawn of Slimani’s Premier League chapter quickly turned false as goals began drying up and his performances started becoming less impactful. He huffed and puffed, tried every way to find a clear-cut role under former manager Claudio Ranieri but he couldn’t and eventually ended up with just 7 goals in the top-flight.

After a bright start to life at Leicester, ending the season with 7 goals was considered way below the standards. But rather than building on his goal tally in his debut season in England, the Algerian shrivelled last term and couldn’t earn the trust of either Craig Shakespeare or his successor Claude Puel.

Slimani found goals hard to come by and was shipped out on loan to Newcastle United during the January transfer window.

The temporary loan switch to Newcastle was a chance for the Algerian to get back his scoring touch, but a thigh injury prevented him from making his debut until late March. And when he returned to full fitness, Slimani hardly made any notable contribution at Tyneside. 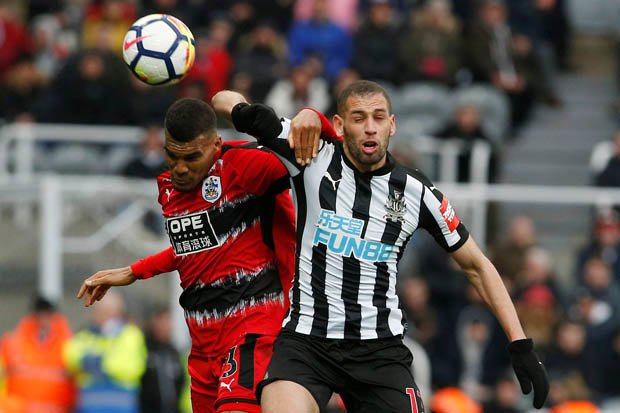 Regardless of Slimani’s forgettable two years in England, there is no shortage of suitors for the 30-year-old, as the likes of Sporting Lisbon and Fenerbahce are reportedly interested in his signature.

No surprises, the Foxes are ready to cut their losses and are said to be prepared to accept just £18m for him this summer.

The English transfer window shuts on August 9 this summer but internationally, it remains open until the end of the month, meaning the Foxes could wait until the end of this month before taking a concrete decision on the future of Slimani.

Read more: Why this Championship club captain could be the ideal replacement for Leicester star Maguire

Having turned 30 in June, Slimani still has a lot to offer but it looks as if Claude Puel wants to offload him this summer. Considering all the aspects, Slimani definitely needs a fresh start to reboot his career and a permanent move away from King Power Stadium appears to be the ideal option.