Aaron Mooy scored twice as Huddersfield surged off the bottom of the Premier League with a 2-0 victory over Wolverhampton Wanderers at Molineux.

The Terriers proved to be more effective and carried more threat going forward than Wolves, who suffered a fourth defeat in five games and remained 11th on the table.

And it was Huddersfield who took the lead with the first chance just six minutes into the game. A misplaced pass from Wolverhampton Wanderers fell to Erik Durm who sprinted past Ryan Bennett towards the by-line before cutting back a pass just inside the box to Mooy, who drilled the ball past goalkeeper Rui Patricio for his first goal in 29 Premier League games.

Before that, it was actually a positive opening five minutes for Wolverhampton Wanderers but after Mooy’s early strike, they rarely threatened Jonas Lossl’s goal. And that was when Raul Jimenez was denied by a fantastic last-ditch challenge in the box.

Huddersfield kept the pressure on Wolves throughout the half and looked for the second goal. They had a brilliant chance to double their money when Mooy whipped in a corner which found the head of Steve Mounie but his effort went straight to Patricio. 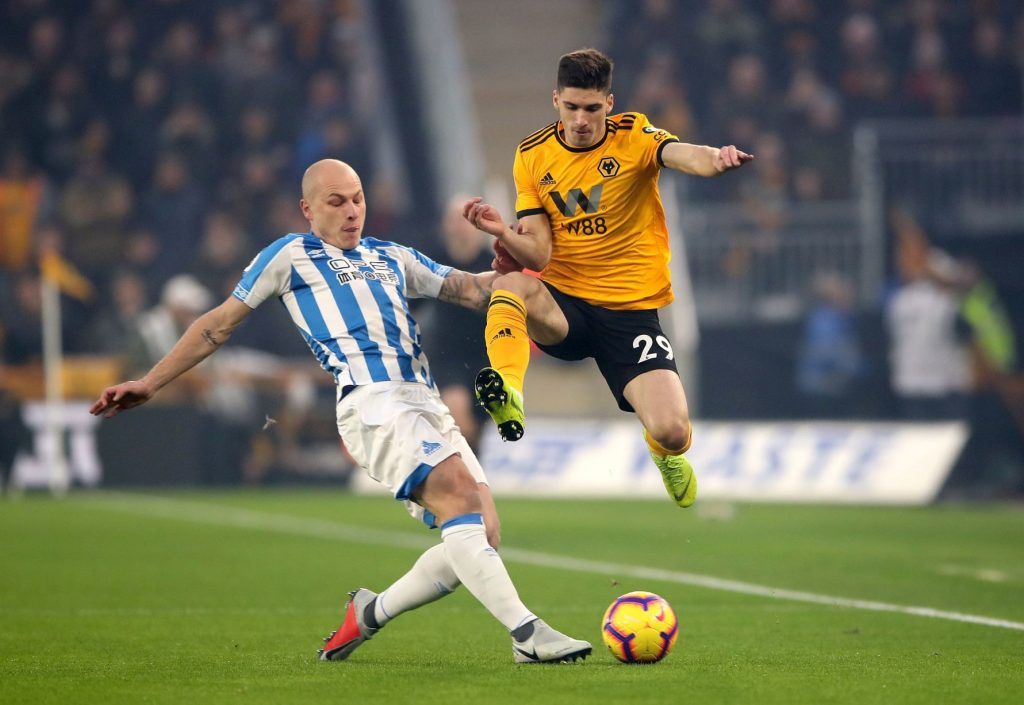 Before the half, Mounie had a superb chance to make it 2-0 and although his header found its way past Patricio, Matt Doherty was perfectly positioned to clear it off the goal line.

Frustrated with the lack of energy and cutting edge in the attack, Nuno took off Ivan Cavaleiro and Joao Moutinho at half-time and replaced them with Adama Traore and Morgan Gibbs-White. Traore made an impact when he clipped in a cross from the right at the far post and Jimenez was there to meet it with his head, only for Phillip Billing to clear away to keep the scoreline at 1-0.

There was definitely more urgency about Wolves’ play and Jimenez was presented with another glaring opportunity to equalise.

Terence Kongolo was down injured near the corner flag so Jimenez was onside despite being clean through on goal. However, beyond the Huddersfield backline, the Mexican was dispossessed.

But very soon, Huddersfield got their second through Mooy, who scored a fantastic free-kick that skipped off the turf and flew into the net after Willy Boly had given away a cheap foul just outside the area.

Wolves continued to push for a consolation goal which never came. The victory saw David Wagner’s Huddersfield rise to 14th on the table.

Read more: Wolves beating Everton to splash £25m on this in-form Ligue 1 with 11 goals would be a statement of intent

Disappointed with the performance and result, here’s how the Wolves fans reacted.

Completely out classed by the bottom of the table team. Embarrassing

Outplayed for ninety minutes. Not good enough. Get rid of Raul in January as he couldn’t hit a barn door. Real quality not showing in this side. Goals needed. Being outplayed by Huddersfield is embarrassing.

That was a Paul Lambert performance, we won’t stay up with performance like that, big reality check needed.

Very disappointing but it seems to happen against the bottom teams😡