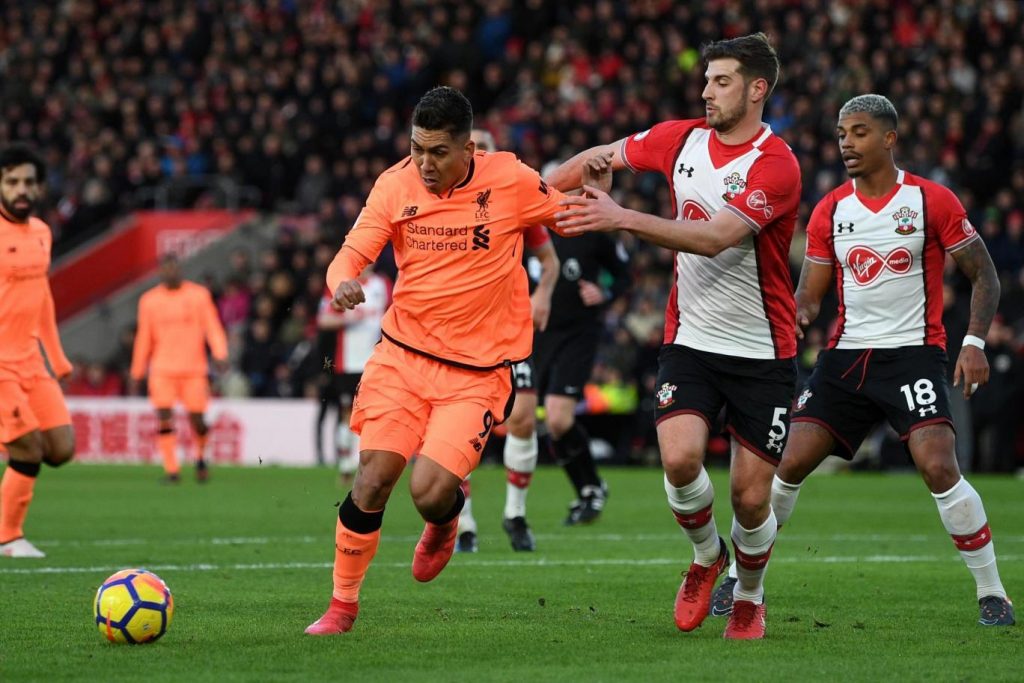 Bottom club Southampton once again failed to register a victory, as they slumped to a 2-0 defeat at the hands of Liverpool in the Premier League today.

The Saints equal their record of going 7 matches without a win in the Premier League and could potentially be in danger of getting relegated this season, especially with both fellow strugglers Huddersfield and Newcastle registering surprise wins this weekend.

The combination of Mohamed Salah and Roberto Firmino proved to be the difference between the two sides as the star attackers combined for both of their goals in the first half. An ineffective afternoon from the Saints attackers mainly led to their demise against the mighty Reds this evening.

Here’s how the Southampton players fared in their defeat to Liverpool.

Couldn’t have done much to save both the goals from Salah and Firmino as he was left completely powerless, thanks to the sheer brilliance of the Liverpool attackers as well as some poor defending from Southampton defenders.

Not the best of evenings for the Portuguese fullback who was completely outclassed by his Liverpool counterpart, Andrew Robertson.

His struggle against the cunning attacking trio of Salah, Mane and Firmino was clearly evident as the English centre-back failed to provide solidity in the Saints backline.

The onus was on Wesley Hoedt to provide a solid performance in the absence of current Liverpool defender Virgil Van Dijk but he failed to meet expectations following a horrid start to the game. The former Lazio man made a terrible mistake, which allowed Salah to get in behind the defence and provide the assist to Firmino for the opening goal in the first half. However, we have to say that the Dutchman did bounce back from his terrible start, with some crisp passes and decent tackling later on.

Looked promising at times but ultimately failed to make a difference as he was totally outclassed by his younger counterpart in Trent-Alexander Arnold, especially in the second half.

Was a key figure in the Southampton midfield, where he made some decent defensive contributions, including his tally of six aerial challenges won.

Looked to be in some kind of discomfort throughout the game and it was totally evident as he limped off in the second half. Not the greatest of outings for the former Juventus midfielder.

Provided absolutely nothing going forward. James Ward-Prowse was arguably the worst player on the pitch, considering how ineffective he was throughout the game, with zero dribbles, zero tackles.

A relatively decent evening for the Danish international, who was always present in the centre of the action, both defensive and offensively. However, he lacked the necessary support from his teammates. He was also making some clumsy passes in the final phase of the game.

One should definitely expect more from the Serbian International who was completely ineffective going forward. He was bossed by the young Trent-Alexander Arnold for most parts of the game while his runs were also bad, as he was caught offside three times, more than anyone else in the pitch.

Failed to provide any kind of spark in the attack after replacing Mario Lemina just before the hour mark, which is clearly evident from the fact that the Moroccan only had 19 touches!

His pace didn’t make any difference as Southampton constantly failed to unlock the sturdy defence of Liverpool FC.

Came on for Oriol Romeu with just ten minutes remaining on the clock, to induce some stability in the Southampton team, which looked destined to conceded the third goal.