Nathan Redmond’s fantastic finish from distance just before the hour mark looked to have earned Southampton a potential three points in their battle to stay in the Premier League.

But Southampton defender Jack Stephens was adjudged to have handled the ball in the area in the third minute of stoppage time and Ashley Barnes, who had a strong spot-kick appeal turned down in the first half, calmly slotted the ball into the net.

It was Southampton who started the game on the front foot at Turf Moor and the first real chance fell for Danny Ings. Matt Targett’s superb pass from the left found Ings in behind Ben Mee, but Tom Heaton came out and made himself big to thwart the danger.

It took the best part of half an hour for Burnley to completely settle down and start posing a sustained threat for the visitors’ defence. Chris Wood missed a good chance to open the scoring for the Clarets as he lifted his shot over the bar after smartly turning inside Jack Stephens before both Ashley Barnes and Jack Cork had their efforts blocked following Burnley’s first corner of the afternoon. 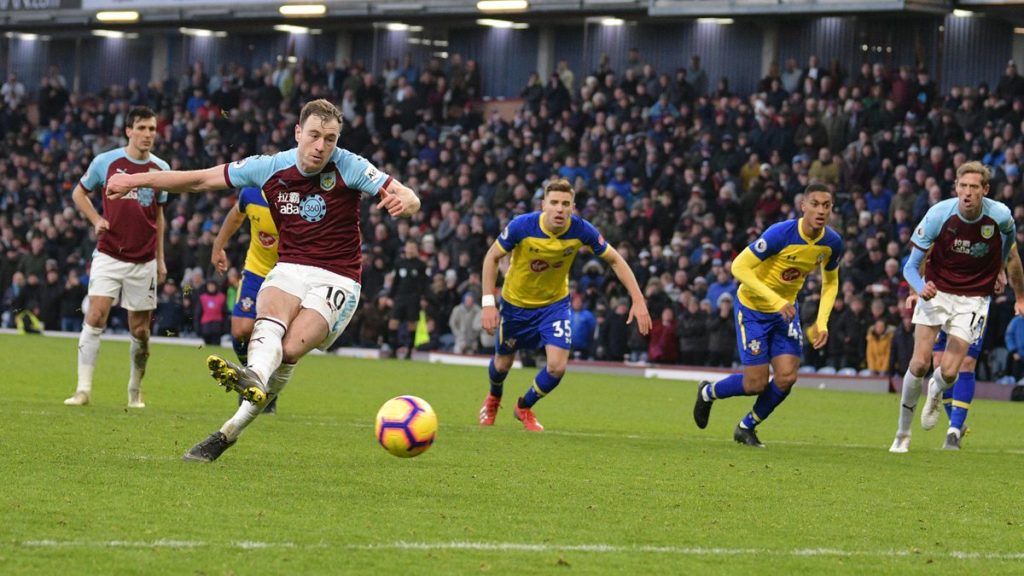 Burnley were harshly denied a penalty 12 minutes before the break and Barnes was booked for diving.

After the break, Saints could have taken the lead through Ward-Prowse but his header that looked to be creeping into the net was smartly kept out by Heaton. However, a goal for the visitors looked imminent and it arrived through Redmond, who advanced from deep and skipped past Cork’s challenge to drive into the bottom corner from 20 yards.

Burnley looked for a response. Johann Berg Gudmundsson and debutant Peter Crouch were thrown on by Dyche. The hosts upped the ante as Barnes was denied by Alex McCarthy from close range after Crouch had caused chaos in the box.

With eight minutes to go, the Clarets came inches close to grabbing the equaliser, with Barnes’ volley crashing against the bar. But the Clarets’ pressure finally paid off deep into added time when Crouch headed the ball on to Jack Stephens’ raised arm and Barnes duly obliged from the spot to make it a point apiece.

Read more: Burnley’s season would be saved if they use this veteran English star’s situation to their benefit

Here’s how the Burnley fans reacted after the 1-1 draw with Southampton at Turf Moor.

Deserved the three points but I’m sure everyone would have taken a point in, at the death, in those circumstances. Looked like being a day of near misses but a stroke of fortune and the shares are spoiled. Could be a big point. The unbeaten run goes on! #twitterclarets