Jurgen Klopp should take a dip in the summer transfer market for a new goalkeeper as he has to upgrade that position following Liverpool’s defeat in the Champions League final to Real Madrid.

Loris Karius, the Reds’ No.1 between the sticks, endured a forgettable night in Kiev as his howlers gifted Real Madrid the Champions League trophy.

Since becoming the first-choice goalkeeper, Karius responded well and dished out impressive performances before the horror night last weekend. While Klopp has sympathised with the 24-year-old, he has reportedly made plans to bring in a new goalkeeper next month.

Alisson Becker of AS Roma has been on Liverpool’s radar for some time now (Roma are demanding £79m for the Brazilian), while the Reds are also monitoring the situation of AC Milan’s Gianluigi Donnarumma, with Liverpool willing to offer £35m for the youngster.

So with Klopp desperate to get a new gloveman for next season, let us have a comparison between Alisson and Donnarumma to see who would be the better fit at Anfield.

Speaking about Alisson, the Brazilian has been excellent this season for Roma. In just a couple of years, he has become one of the most in-demand goalkeepers in Europe. With fantastic reflexes and shot-stopping abilities, Alisson has established himself as the first-choice goalkeeper in the national team.

Donnarumma, on the other hand, has become one of the sought-after goalkeepers in Europe, impressing with his agility and athleticism coupled with fine reflex saves. He is the future of Italian football and the natural heir to Gianluigi Buffon in the national team setup.

Comparing the two, Alisson conceded just 27 goals in 34 games, while Donnarumma let in 38 goals in 34 matches. Part of conceding goals is mainly down to the defence the goalkeepers have in front of them and without a shadow of a doubt, Roma had a well-drilled backline than Milan.

While Alisson made 92 saves as compared to Donnarumma’s 72, the latter punched the ball 17 times, five more than the former. This simply says that the AC Milan goalkeeper prefers punching the ball more often to avoid danger in the box. 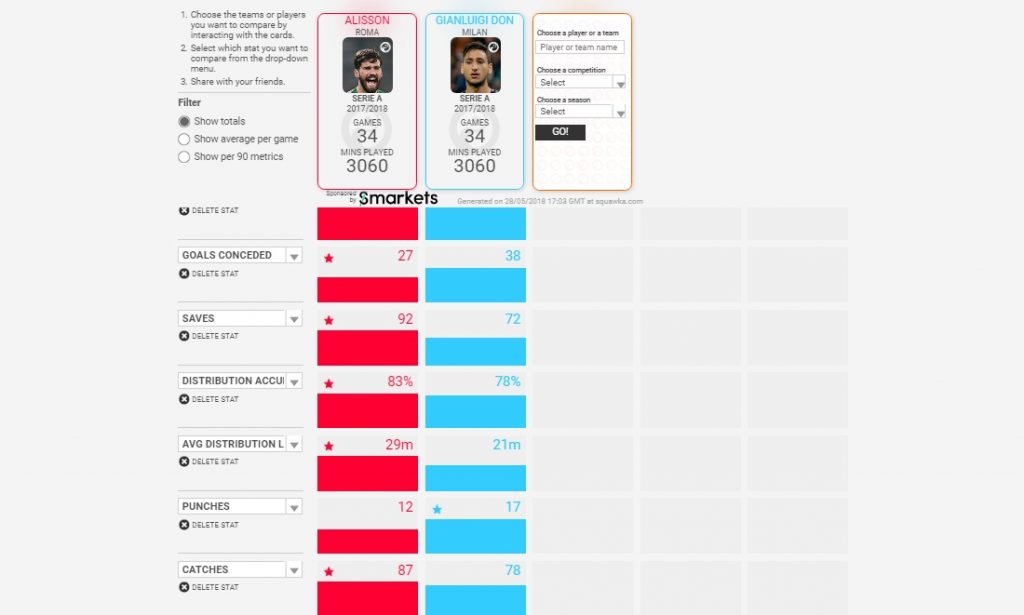 In terms of distribution accuracy, Alisson enjoys 83% success in comparison to Donnarumma’s 78%, which clearly tells us that the Brazilian is more composed with the ball at his feet than the Italian. Also, Alisson made 87 catches in the league this season in contrast to Donnarumma’s 78.

Keeping everything in mind, Alisson looks to be more alert in goal, composed on the ball and matured than Donnarumma. Of course, Donnarumma at 19 years of age is considered to be the future of Italy but he still has few facets of the game that needs to be developed before becoming a top goalkeeper.

Alisson, on the other hand, looks to be a commanding and a reliable presence in goal, capable of coping with the demands of the Premier League. The fact is that the Brazilian is capable of becoming Liverpool’s No.1 next season.