The winter transfer window has reached its climax and the Premier League clubs are being desperate to clinch last-gasp deals to fix their fragility. Chelsea, the defending Premier League champions, are going through a turmoil at this moment following a knockout from League Cup semis versus city rivals Arsenal and their league form has been a shadow of their earlier self. Blues boss Antonio Conte has expressed his discontent regarding a few transfer deals wrapped up by the club as he is still struggling to find a regular goal-getter in the absence of Diego Costa.

Alvaro Morata, the ex-Real Madrid star, was expected to serve the purpose but is having a rough patch for quite a while now, despite experiencing a blistering inception in English football. Michy Batshuayi, the young Belgian forward, hasn’t impressed as Morata’s deputy and the gaffer is now seeking an out-and-out striker to sort out the conundrum.

There have been some bizarre rumours regarding Chelsea’s interest in strikers but Edin Dzeko seems to be the most likely choice following his stunning spell for AS Roma. The talks are going on between the two clubs and they are closing in on striking a deal for the 31-year-old.

However, latest reports suggest that Chelsea have made a loan enquiry for Arsenal hitman Olivier Giroud, who is already second-fiddle to Alexandre Lacazette. He will go further down the pecking order if the Gunners manage to strike a deal for Borussia Dortmund’s Pierre-Emerick Aubameyang by the end of this month. Giroud has stayed loyal to Arsenal and Arsene Wenger has been a keen admirer of his professionalism and commitment to the club.

He has mostly explored the French international as his ‘Plan B’ this season and has introduced him from the bench to clinch a late resurgence when needed. The player is reluctant to join the Blues but Chelsea are still hopeful of pursuing a deal if they somehow fail to bring Dzeko at Stamford Bridge.

Giroud, 31, is a Premier League veteran compared to 25-year-old Spaniard Alvaro Morata who is having his first taste of English football. Morata started the season with great impact but has somewhat lost is plot lately. Yet, he has contributed 10 goals and 4 assists in 20 league outings (two of which have been from substitute appearances) whereas he’s found the net only once in 5 Champions League games.

Giroud, on the other hand, has made only one league start out of 15 as he’s come off the bench on the remaining 14 occasions. The Frenchman has only scored 4 times this Premier League season and has been handed 361 minutes of league football compared to Morata’s 1522. Giroud, known for his aerial supremacy, has won 1.5 aerials-a-game on an average whereas the Spaniard has won it 1.9 times.

The Chelsea hitman has attempted 3 shots per game which is much higher than Giroud’s 1.2. But the French forward has started regularly in Europa League outings and has scored 3 goals in 6 games that hands him better European record over the ex-Real Madrid star. 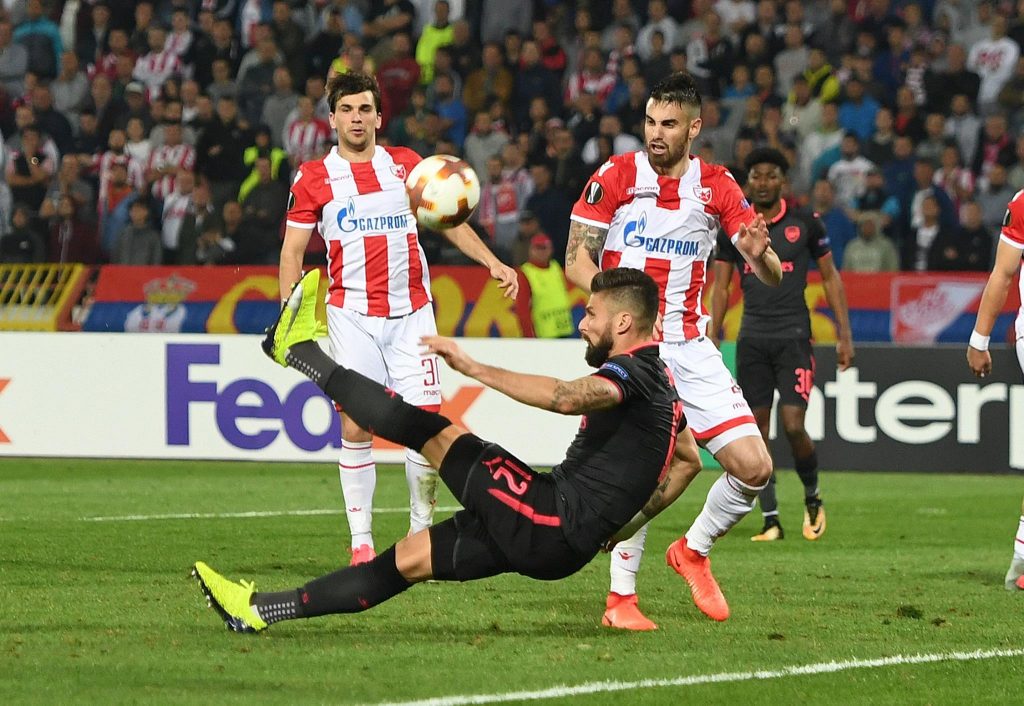 The previous campaign, however, will allow us to have a brighter pictorial view. Morata had 14 league stars (and 12 substitute appearances) for Real Madrid last season where he netted 15 times and assisted on 4 occasions in 1334 minutes of Spanish football. Giroud, meanwhile, grabbed 11 goals and 3 assists in 11 league starts (and 18 appearances off the bench) within 1198 minutes of league football.

He showed aerial supremacy and won 1.7 aerials per game compared to Morata’s 0.9. Morata, on the other hand, had 2.1 shots-a-game whereas Giroud had only 1.3. The Spaniard only had 167 minutes of Champions League football but scored thrice and assisted once compared to Giroud’s 2 goals and 1 assist in 312 Champions League minutes.

Real Madrid won both the La Liga and Champions League titles last season and Morata always left his mark in limited game time. Giroud, on the other hand, helped the Gunners clinch the FA Cup title in what was a disappointing campaign for Arsenal that saw them get knocked out from Champions League Round of 16 against Bayern Munich and finish outside ‘top four’ for the first time in two decades.

So Morata should be handed some more time to settle in and regain his lost form as he holds the traits to be the solution to their striker conundrum. Giroud, meanwhile, will serve the purpose of a great bench strength and maybe a little bit more if Conte is preferring a ‘fox in the box’ with more physical presence.