Chelsea start their FA Cup campaign on Sunday when they lock horns with Nottingham Forest at the Stamford Bridge.

The Blues have performed very well under Frank Lampard this season and are currently fourth in the Premier League table. They come into this game on the back of a 1-1 draw with Brighton on Wednesday.

Nottingham Forest, meanwhile, are fully focused on securing promotion to the top-flight and will pose a stiff test to Lampard’s Chelsea.

Marcos Alonso is doubtful against Forest after missing the Brighton game with a buttock injury. Olivier Giroud remains sidelined with an ankle problem, while Fikayo Tomori has an unspecified problem that kept him out against the Seagulls.

Kepa is Chelsea’s undisputed first-choice goalkeeper and he’s likely to be seen between the sticks on Sunday.

James had a good game at Brighton and is likely to keep his place at right-back on Sunday.

Rudiger hasn’t been at his imperious best since returning from a long-term injury. Yet, he’s gradually getting there and must start in defence.

Zouma has improved after a shaky start to the campaign and will partner Rudiger in central defence against Nottingham Forest.

With Alonso injured and Azpilicueta having played the entire game at the Amex Stadium on Wednesday, Emerson could get a chance to start in the FA Cup tie against Forest.

Kante hasn’t been at his best this season, partly due to injury problems. Nonetheless, the Frenchman is a fantastic player and should keep his place in Lampard’s side.

Jorginho has looked bright in the last couple of games and he will be key to hold off any of Forest’s threatening attacks.

Mount is a crucial cog in Lampard’s quick, attacking football at Chelsea. He can cause all sorts of troubles to the opponents in the final third.

Pulisic’s form has dipped over the last few weeks, although he started at Brighton on Wednesday. He’ll keep his place on the left flank.

Hudson-Odoi is a promising talent who can be lethal on his day. He must look to seize the opportunity given by the Chelsea boss.

Batshuayi is a real handful for the defenders due to his aerial ability and strength. The Belgian needs a goal or two to get his mojo back. 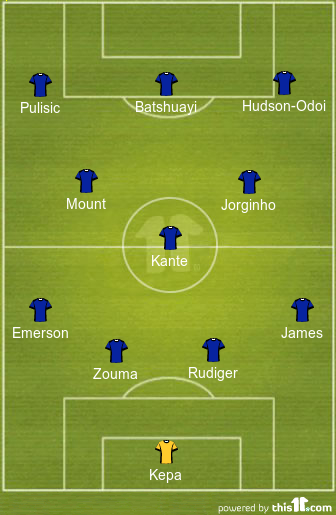