Leicester’s poor away form this season continued as Bournemouth bounced back from the weekend 3-2 loss against Burnley to secure a 1-0 victory against the current League champions at the Vitality Stadium on Tuesday night. The win lifted them into the top half of the table with the Cherries now occupying 10th place.

Eddie Howe’s side had struggled at home last season, but with 16 points and four clean sheets from eight games at the Vitality Stadium this season, Bournemouth have one of the best home records in the Premier League this time around.

Bournemouth resorted to bringing in young talents primarily in the transfer window, that saw them sign the likes of Jordan Ibe, Brad Smith, Lewis Cook etc. While the move came with a risk, it seems to be paying great dividends for the Cherries. One of those summer signings who has impressed greatly has been Nathan Ake. Signed from Chelsea on loan, his move to Bournemouth came with a promise of regular playing time under one of England’s most promising managers in recent years at a side that plays good football, but the Cherries’ settled backline meant the 21-year-old initially struggled to make his way into the playing XI.

Ake, before November, made only two substitute appearance for Eddie Howe’s side featuring for a total of 13 minutes. However, when Adam Smith was suspended, the young Dutchman finally got his chance and he hasn’t looked back since. Ake made his first league start of the season against Mark Hughes’ Stoke City last month and grabbed his chance with both hands, scoring the only goal of the game as Bournemouth triumphed against the Potters. The defender has since featured in Bournemouth’s last four Premier League encounters from the start, following that game against Stoke.

And he has completely justified his place in the side and returned the faith Eddie Howe has shown in him with some solid performances at the back. Ake’s WhoScored.com rating from all games (7.51) is better than any Bournemouth player to have featured from the kick-off more than once in the Premier League so far this season. And according to WhoScored, Ake has been the best under-21 player among the ones that have started more than one game.

The 21-year old had a great season on loan with Watford last year and with his displays for the Cherries, this term he is just proving his capabilities as one of the most promising defenders around.

He has already scored two goals for his loan side, both winners, one against Stoke and the other coming in the 90th minute against Liverpool in Bournemouth’s 4-3 win over the Reds.

With the Dutchman’s abilities to play as a left-back and a left-sided centre-back, his versatility and comfort in either position could see him become a key member in the Chelsea setup who have shifted to a three-man defence under new boss Antonio Conte. 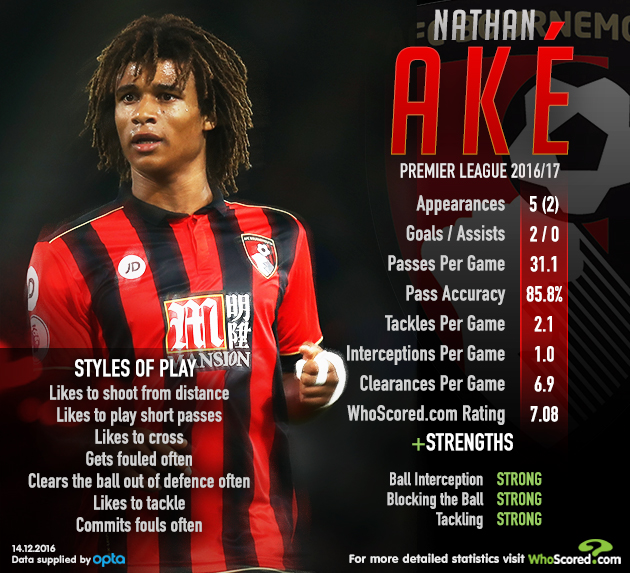 With the current option on the left-side of the three-man defence, Gary Cahill, turning 30 and his form going through ups and downs, his spot is something Ake could make his own. He would obviously face stiff competition from the likes of Kurt Zouma and fellow loanee Andreas Christensen, who is impressing with Borussia Monchengladbach, but Ake’s top-flight experience might clinch it in his favour.

With Chelsea playing with an approach that sees them play the ball out of the back regularly, Ake could fit in very well with the Blues’ philosophy having had a pass success rate of 85.8% this term, the third best for the Cherries. Of the 43.4 passes per game started that Ake averages, 19.6 are in the forward direction. In comparison with the Chelsea players, Azpilicueta has made the highest forward passes per start (27.5), with Cahill (20.4) second. With the Blues enjoying a better share of possession (53.8%) than that of the Cherries (51.6%), it is quite natural to see the numbers are better for the Chelsea defenders. But having said that, Ake’s stats show that he can comfortably slot in the Blues backline.