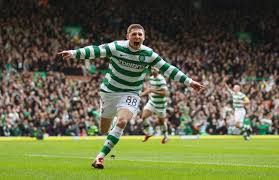 QPR are closing in on the signing of Gary Hooper from Celtic. The Londoners have fought off keen interest from premier league sides Norwich and Hull, who both had bids rejected for the forward. Rangers offered £5m for the striker and are believed to be concluding personal terms. Hooper’s Celtic side are traveling to Belfast for their Champions League qualifier against Cliftonville but have left the striker behind as this transfer saga rolls on. The Bhoys’ assistant manager Johan Mjallby said that he was suffering a groin strain but he later admitted that the R’s had made a new transfer bid.

In his three year spell at Celtic Park he has scored eighty-two goals and has guided the club to two Scottish Premier League titles, two Scottish Cups and of course the last 16 of the Champions League last season. Celtic manager Neil Lennon admitted that it would be very difficult to persuade Hooper to extend his contract, which has one year remaining. In an interview last week, Neil Lennon said,

“He has not featured much in pre-season and the games start in earnest for us on Wednesday night. So he’d have a bit of catching up to do and I don’t know where his mind is at the minute. Has he played his last game for Celtic? Never say never but it’s looking more and more that way.”

Before joining Celtic, Hooper was in England with Scunthorpe United, Southend United and non-league side Grays Athletic. What a difference from winning title after title in the SPL.

More transfer news concerning Queens Park Rangers as they have signed former Aston Villa and Manchester City defender Richard Dunne. Dunne was released by Villa after no appearances for the Birmingham-based side whatsoever last season with a recurring groin problem. After joining from Man. City in 2009 the thirty-three year old has made a total of 111 appearances.

“He’s a top-class defender and just what we need,” R’s manager Harry Redknapp told the club website. “He will be fantastic at this football club. He’s exactly the type I’m looking for. ”

Obviously he had his problems last season with the injury but there’s an agreement in place that if he breaks down, the contract can be ended,” Redknapp continued, “He’s confident he’ll be okay and from our point of view, if he doesn’t have any problems with it then we’ve just signed a very, very good centre-back.”

Dunne played his first match in the whole of 2013 in Ireland victory over Georgia last month, which was an international friendly.

Leeds United have appointed former player Neil Sullivan as the academy’s new goalkeeping coach. The forty-three year old played at Elland Road for three years, 2004 to 2007, and made 110 appearances. Neil Sullivan was released by Doncaster Rovers after helping the side win the league and promotion last season. He released by Paul Dickov, his ex Scotland teammate, after making 181 appearances.

Doncaster have already gone to work to find a new replacement though as they have taken Slovakian keeper Marian Kello in on a trial. The Welshman was officially the oldest player in the whole football league last season at 43. The experienced goalkeeper said to the Leeds club website that, “I’m delighted to be back and I’m looking forward to the opportunity.”

The veteran Sullivan is infamous for being the keeper that was in goal when David Beckham scored that goal for Manchester United against Wimbledon from the halfway line.