Well, that is some way to resume after an international break! Scottish Premiership’s biggest game is upon us as Celtic and Rangers lock horns once again.

The Old Firm derby will take place at the Parkhead this Sunday, with the Hoops having a chance to exercise their dominance over the Gers in this title race.

Currently, Neil Lennon’s men are 10 points ahead of Steven Gerrard’s side with less than a handful of games remaining this season.

In the reverse fixture, Rangers got the better of Celtic at the Ibrox. Hence, the latter would be aiming to seek revenge at their home ground on Sunday.

Without further ado, let us take a look at the combined line-up, featuring players of both teams (players who are fit to play the upcoming game).

On current form, Bain has done well in goal for Celtic. Hence, he starts in goal in this combined line-up.

The Hoops have had problems at right-back, while Tavernier has done well there for the Gers. Thus, the latter gets the nod ahead of Mikael Lustig and Jeremy Toljan.

The Belgian international is fit to play this game and is a certain starter in this combined XI.

The former Brighton man has done well at the back in his first season at Rangers. Hence, he should partner Boyata.

The Scotland international is arguably the best left-back in the Scottish league and is fit to start this Sunday. Thus, he must start ahead of Andy Halliday, as Borna Barisic is a doubt.

The Celtic captain is a consistent performer in the midfield and always gears up to do well in the Old Firm derbies. He would be up for it on Sunday and gets the nod in this line-up.

Jack has done well in the deeper-lying midfield role for Rangers. On the balance of this team, he should partner Brown.

The loanee from Liverpool is a real danger for any defence in the league. Scott Sinclair’s recent form has been slightly wobbly, hence, he makes way for Kent in this line-up.

Daniel Candeias has done well but the overall impact of Forrest gets him into this combined line-up.

He has been in top form for Rangers this season and can get into any line-up in the Scottish league.

The Frenchman has been in good form recently and should partner Morelos in this combined XI. 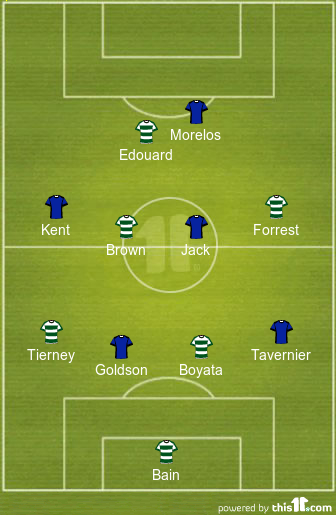