Neil Lennon’s side made light work of Aberdeen on Sunday, thrashing them 4-0 at Pittodrie Stadium. The visitors were 4-0 up by half-time through goals from Odsonne Edouard, Jeremie Frimpong, James Forrest and Mohamed Elyounoussi.

The Glasgow giants will aim to make it three league wins on a bounce against St. Mirren, who have won just once in their last five games.

Oliver Ntcham missed the trip to Aberdeen with an ankle injury and is likely to be sidelined for Wednesday’s game too. Jozo Simunovic is another player who will miss out for Lennon’s side due to a knee injury. Mikey Johnston and Leigh Griffiths remain sidelined as well.

The Hoops will also have to make do without the services Ryan Christie, who will serve the third and final match of his suspension after having been sent off during the club’s game against Livingston.

Forster is Celtic’s first-choice keeper and that should be the case on Wednesday as well.

Frimpong got his first Celtic goal in the 4-0 victory over Aberdeen. He has been a breath of fresh air, with his overall play and maturity belying his tender years. The teenager is a certain starter at right-back.

Jullien is beginning to justify the hefty transfer fee Celtic paid for him. Although the towering Frenchman was taken off at half-time at Aberdeen, he is expected to keep his place in the team against St. Mirren.

Brown has been going strong despite his advancing years and is likely to start in the middle of the park again.

With Brown alongside him, McGregor will look to boss the game. There are no doubts regarding his place on Wednesday.

With his raw pace, power and movement, Forrest will be a big threat down the right for the St. Mirren defenders.

Rogic is the creative presence who acts as a link between the midfield and the attack. The Australian will start in the No.10 role.

The Norwegian was at his sublime best against Aberdeen at the weekend. He would hope to repeat that on Wednesday and get on the score sheet as well.

Odsonne Edouard simply cannot stop scoring goals. The Celtic striker was in sensational form yet again on Sunday as he continues to thrive under Lennon’s guidance. He will be hoping to take this form into the midweek clash with St. Mirren. 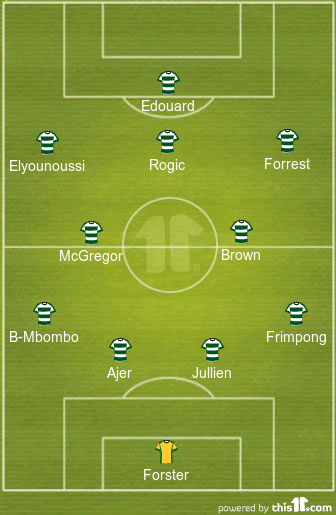