Celtic welcome Motherwell to Celtic Park on Sunday hoping to retain the top spot of the Scottish Premiership table.

The Hoops beat Lazio 2-1 in the Europa League with a last-gasp winner on Thursday. Ciro Immobile put Lazio ahead inside eight minutes but James Forrest levelled before the break. Olivier Ntcham came off the bench to score the winner deep into stoppage time, firing the Bhoys into the last 32 with two games to spare.

The victory over Lazio should give Neil Lennon’s Celtic a lot of confidence and they’ll look to head into the international break with all three points on Sunday.

Celtic were without Boli Bolingoli-Mbombo and Tom Rogic for their Europa League clash with Lazio and the pair remains doubtful for Sunday’s game.

Forster was in inspired form against Lazio on Thursday, making some crucial saves to help Celtic win. He is definitely starting in goal again.

Frimpong was rested against Lazio, so he’ll be fresh to face Motherwell on Sunday.

Ajer is one of the first names on the team sheet these days and have to be at the top of his game to keep Motherwell forwards at bay.

Hayes had a few shaky moments against Lazio in the first half but calmed down as the game progressed. As Bolingoli-Mbombo looks a doubt, he’ll retain his place at left-back.

A tough-tackling midfielder, Brown will look to set the tempo of the game from minute one against Motherwell.

McGregor is indispensable to Lennon’s Celtic side. The Scotsman is expected to partner Brown in central midfield at the weekend.

Forrest has impressed since the start of the season and deserves to retain his place in the team.

Christie is an intelligent player who links the midfield with the forward players. He should start in the No.10 role against Motherwell.

Elyounoussi had a fine outing against Lazio, impressing with his movement and ability to exploit little spaces behind the opposition defence. The Norwegian must start on Sunday.

Never stops running and harrying the defenders. Edouard will lead the Hoops attack against third-placed Motherwell at Celtic Park. 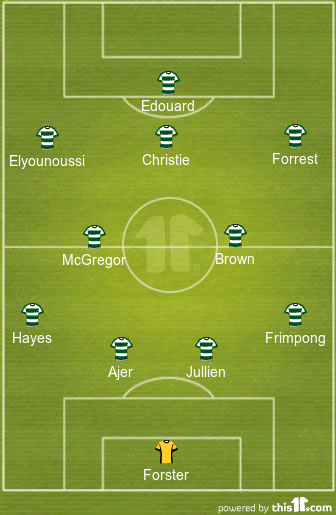