Red-hot Celtic travel to Livingston on Sunday, hoping to retain their top spot in the Scottish Premiership table.

The Hoops got the better of CFR Cluj 2-0 at Celtic Park in Europa League Group E on Thursday evening, thanks to goals from Odsonne Edouard and Mohamed Elyounoussi.

Neil Lennon will now expect his boys to do the job at Livingston, who come into Sunday’s game on the back of three consecutive league losses.

Leigh Griffiths has been struggling with fitness issues and could miss out again. Mikey Johnston remains a doubt for Sunday’s game but long-term absentees Jozo Simunovic and Daniel Arzani are definitely out.

Forster is now Celtic’s first-choice and should be in goal on Sunday.

Hatem Abd Elhamed got a chance against Cluj on Thursday, so Moritz Bauer could be fresh to start at right-back at Livingston.

Jullien has done well for his new club so far, being the leader that Celtic had missed for a long time. He’ll keep his place in the team.

Ajer has blown hot and cold this season. However, the Norwegian should continue partnering Jullien at the back.

Boli Bolingoli-Mbombo has shown signs of adapting to the Scottish Premiership in recent weeks. He should continue at left-back.

Even at the ripe age of 34, Brown is going strong and will lead his team out at the weekend against Livingston.

McGregor is one of the most talented players in Lennon’s team. He should start against Livingston this weekend.

The in-form Forrest will be a real threat to the Livingston defenders due to his blistering pace and elusive movement.

Ntcham has done well in an advanced role this season, linking the play between the midfield and the attack. The Frenchman is a certain starter at the Almondvale Stadium.

Christie is a creative player who provides flair and invention in the final third for the Hoops. He should start on the left flank.

Edouard is in dream form at the moment, scoring goals consistently. The Frenchman is expected to lead Celtic’s attack against Livingston. 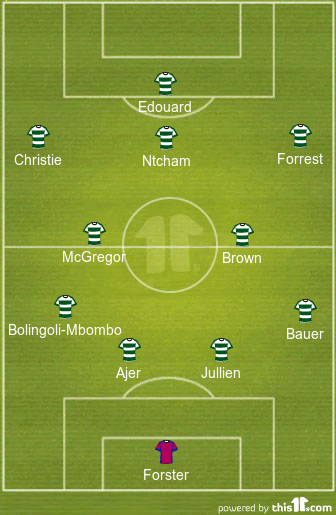