Celtic face a visit to Lazio on Thursday as Neil Lennon looks to beat the Italian outfit in the Europa League once again this season.

Lennon achieved a personal milestone when Christopher Jullien’s last-minute header secured the win at Parkhead 12 days ago to give him his first success against a Serie A side as Hoops manager. A victory at Lazio would seal Celtic’s qualification to the Europa League knockout phase.

However, Lazio will pose a different threat at home as Simone Inzaghi looks to avenge the Parkhead defeat.

Leigh Griffiths is closing in on a return from his injury lay-off, having not played since the 3-1 win over Hearts back on August 25.

Vakoun Bayo has a knee problem which could sideline him for nearly two months.

Forster is Celtic’s undisputed No.1 and should start against Lazio on Thursday.

Frimpong has impressed a lot with his matured displays at right-back. He deserves to keep his place in the team.

Ajer is one of the first names on the team sheet these days and alongside Jullien, he should try his best to stop Ciro Immobile and co. on Thursday.

For the left-back spot, Lennon could go with Hatem Abd Elhamed ahead of Bolingoli-Mbombo, who had a shocking 45 minutes in the midweek Betfred Cup semi-final fixture against Hibernian.

For such a big European game, Brown will be expected to step up and deliver a skipper’s performance.

McGregor has been a permanent fixture for Lennon’s side since the start of the season and deserves to keep his place in the team against Lazio.

For an away fixture and against a top Lazio side, Lennon could pack the midfielder with an extra ball-winner in Ntcham.

Christie has been in sensational form since the start of the season and is a certain starter against Lazio.

Elyounoussi was at his devastating best against Hibernian in the Betfred Cup semi-final. He would hope to repeat that on Thursday.

Edouard is in red-hot form and will lead the Hoops’ attack at the Stadio Olimpico. 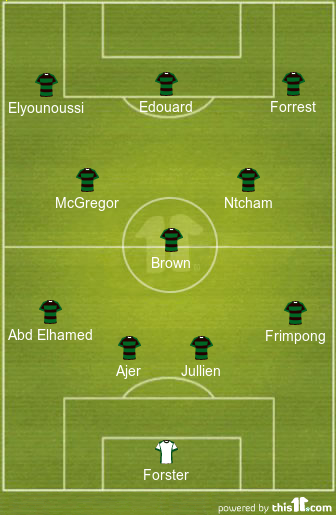