Chelsea’s skipper John Terry returned to action in midweek for the EFL Cup game against West Ham, and for the first time, Conte lost a match with the 35-year-old in the starting lineup. Before getting sidelined after picking up an injury against Swansea, Terry was a key player in the Italian’s defence, playing all 360 minutes of the first 4 league games.

In all, Chelsea only drew a game (Swansea) and conceded just 4 goals, keeping a clean sheet against Burnley. In the next 2 games in his absence, the Blues got beaten back to back, and conceded 5 goals in the process. Then the switch in formation from a 4-man defence to a 3-man’s came about.

If Terry’s injury forced Conte into making the tactical change is unknown, but it worked to a tee. 4 straight games in the EPL, and the Stamford Bridge outfit are yet to lose, draw or concede a goal. 11 unreplied goals against Hull, Leicester City, Manchester United and Southampton have established Chelsea as the team to beat after their early slip-ups.

Now with the leader of the team fully fit, should he be returned to the lineup? Bearing in mind that the 3-4-3 has come to stay. The League Cup game was perhaps the best avenue to audition Terry for a role in the new defence system, and he was assisted by long-term partners David Luiz and Gary Cahill. For 90 minutes, Chelsea trailed by 2 goals and are now out of the competition.

Is Terry a poor or perfect choice in this new system? A match isn’t enough to make a decision, but judging from the instruction manual that comes with operating as part of a 3-man rearguard, an ageing LEGEND falls short of the ability to give 100% on a consistent basis.

Against West Ham on Wednesday, he played in the middle of the defence, and did put in a solid game. But that position is best played by its current occupant – David Luiz. At Juventus and Italy, the role is taken up by a Chelsea-target Leonardo Bonucci. Both players have one thing in common – their ability on the ball. In that they are comfortable with it at their feet, go forward with it and lay an assist right from the back with it. 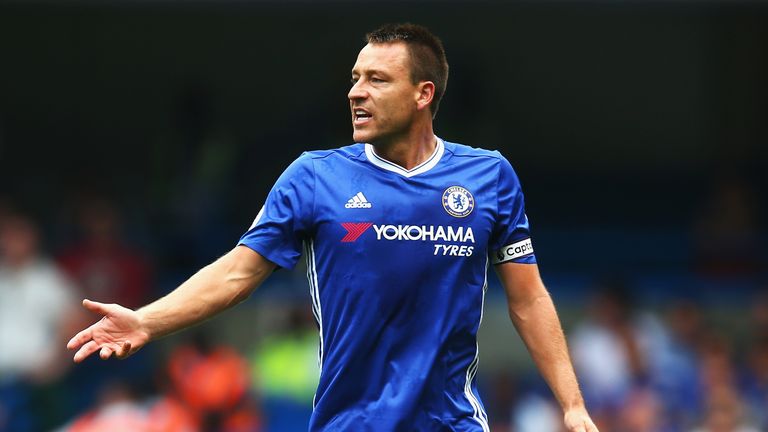 Luiz is the perfect man to play in the position, and while he has got nothing on Terry defensively, his offensive abilities make him the man for the job. He has the speed to join the defence immediately once the team is caught on the counterattack. John isn’t the fastest man on the ball, and how long before the wear and tear that comes with the rigours of such vital position catches up with him.

Terry was never Conte’s first choice for any of his central back positions even though he was the one that agreed his contract be extended. That wasn’t to allow the ex-England captain cheat on nature and on the law of diminishing returns. Rather, it was to help the team regain its feet with his leadership qualities after such a fall from grace last season.

With the berth for the central defence taken up, the only position left would be on the left of the defence given his strong foot and having primarily played on the left side as a central half. And that spot belongs to Cahill. For now.

While he is also a doubt in the long-term with Zouma and Ola Aina looking more like reliable options, his ability to cover Luiz and close down opposition wingers who have gone past Alonso makes him the right choice at the moment. There are also one-on-one situations and tackles to deal with, none of which are Terry’s expertise.

In a 4-man defence, Terry has a chance, but with 3 men at the back, opposition attackers will exploit his weaknesses. Not something Conte wants to risk at the moment in their smooth run of games.