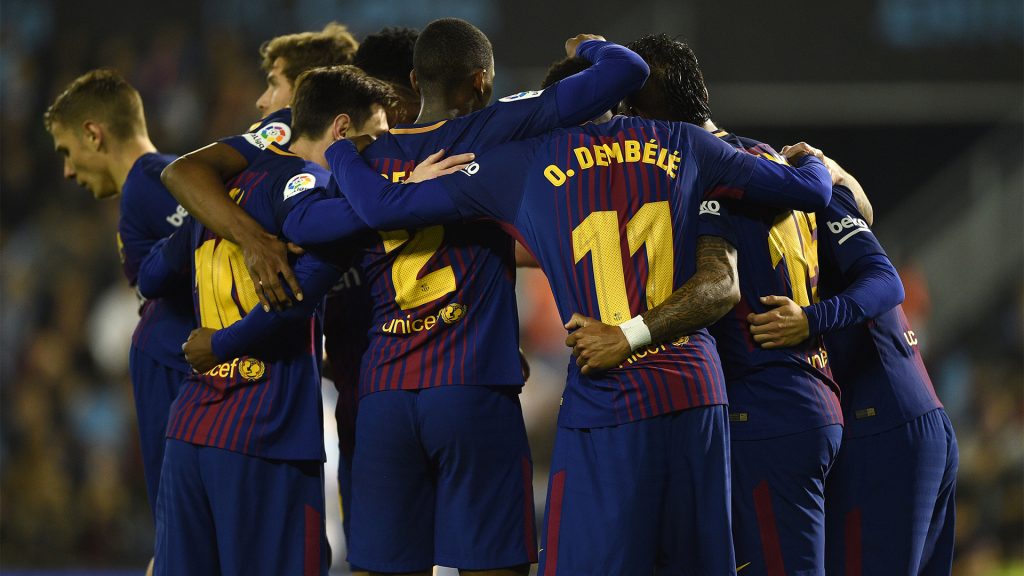 Ten-man Barcelona were held to a 2-2 draw by Celta Vigo, in a highly entertaining encounter at the Balaidos in the La Liga on Tuesday night.

The Catalans took the lead in the 36th minute through summer signing Ousmane Dembele, who scored his first La Liga goal for the club but Celta went into the break on level terms after Jonny scored the equalising goal on the stroke of half-time.

Twenty minutes into the second period, Barcelona reclaimed their lead when Paco Alcacer tapped home from close range. However, they were dealt a blow when substitute Sergi Roberto was sent off in the 71st minute, complicating matters for Ernesto Valverde’s men. With just eight minutes left to be played Iago Aspas bundled home to make it 2-2.

The result meant Barcelona’s unbeaten run in the La Liga extended to 40 games as they took another step towards lifting the La Liga title. Here’s how the Blaugrana stars fared on the night against Celta.

Captaining the team on Tuesday night, the German international was in his elements as he pulled off spectacular stops to deny Maxi Gomez and Brais Mendez. Perhaps he could have done better to stop the second goal.

The Portuguese right-back looked good going forward but was exposed at the back as Celta exploited his flank regularly. Set up the second goal with a great cross.

The Colombian defender was starting just his second game, two months after he made his first start and the rustiness showed at times. Did fairly well but allowed Aspas through for the equaliser.

The Belgian defender was handed a rare start in defence but he failed to make the most of the opportunity. Was given a tough time by Aspas but he did get stuck in and tried hard.

Returning from an injury, the French left-back was pretty ordinary. Hardly offered anything going forward and wasn’t always convincing at the back. However, the late block to deny Aspas the winner earns him an extra point.

Lent experience and leadership in the middle of the park and battled hard. Was unlucky to see a headed effort bounce back off the woodwork. Was involved heavily in Barcelona’s second goal.

The Portuguese international hardly did anything of note until he gave the ball away to Celta, leading to Jonny’s goal in the first period. Was taken off early in the second period.

Started brightly but faded with time. There were some nice moments but there were equally frustrating ones too as he kept conceding possession time and again.

Scored his first La Liga goal to hand Barcelona the lead in the first half. However, he did little of note after that. Like Denis Suarez, he showed glimpses of quality but more often than not, he lost the ball to the opposition.

Set Dembele up for the opening goal before getting one for himself after the hour mark, poking in Paulinho’s shot. A decent outing from the former Valencia man.

Looked a cut above the rest each time he was with the ball at his feet. Played a hand in the first goal but was taken off early ahead of the weekend’s Copa Del Rey final.

Replaced Coutinho at the hour mark and was immediately involved in a couple of attacking moves. Started off very brightly but the red card to Roberto seemed to suck out the momentum from his team.

Came on for Gomes at the 60th-minute mark, Roberto’s stay on the pitch lasted just 11 minutes as he was sent off for fouling Aspas and denying Celta a clear goal-scoring opportunity.

Came on to replace Dembele with less than fifteen minutes left to be played.