Newcastle United player ratings vs Cardiff City: Who impressed and who didn’t?

Kenedy missed a stoppage-time penalty as Cardiff City secured a 0-0 draw against 10-man Newcastle United in their first home game back in the Premier League.

Isaac Hayden saw red for the visitors in the second half, but Cardiff could not find a way past an organized Newcastle side at Cardiff City Stadium and had to be content with a point.

Goalkeeper Neil Etheridge was forced into a string of first-half saves and then saved a heroic penalty to ensure the Bluebirds opened their account in the Premier League.

Stayed cool as a cucumber and was rarely troubled by the hosts’ attackers.

A poor outing for Manquillo as the Spaniard offered very little going forward and was defensively uninspiring.

Some very assured defending in the first half and marshalled the back-line well, albeit up against the ineffective Kenneth Zohore for most of the game. 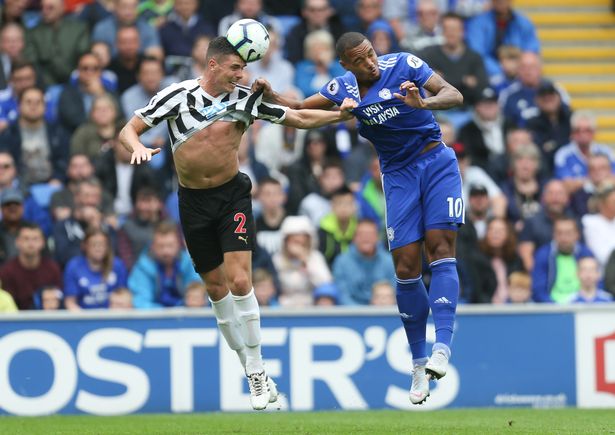 Solid as usual, Clark was aerially imposing and kept Zohore in check.

Dummett worked really hard at left-back, although he didn’t offer much while going forward. However, he tracked his men well.

Worked diligently throughout the game and was harshly booked for a challenge in the first half.

Shelvey maintained his composure throughout the game even after Newcastle went a man down. Maintained his quality and played some incisive through balls.

Although he made some great clearances, Diame was wasteful and got robbed off position a number of times by the Cardiff players. Luckily for the Senegalese and Newcastle, the hosts lacked the cutting edge.

Kenedy couldn’t work his magic in the first half as he failed to complete a single pass. He looked better after the break though, showing his desire to want the ball. Had the chance to win the game through a penalty but hit straight at Etheridge. Furthermore, he could face a ban for a silly kick at Victor Camarasa.

Perez made some good openings and always kept the Cardiff defenders on their toes.

Other than providing an aerial threat, Joselu didn’t offer much being the lone striker.

Deserved the red card after clattering into Josh Murphy. Very poor and indecisive from Hayden.

Read more: Signed for £6m: This South American could flourish under Rafael Benitez at Newcastle United

Came in at the 55th minute and showed great vigour. However, it was his attempted cross that touched Sean Morrison’s hand, leading to the penalty.

Didn’t do much in the attack but it was a pleasing sight to see the identical twins — Josh and Jacob — coming up against each other.